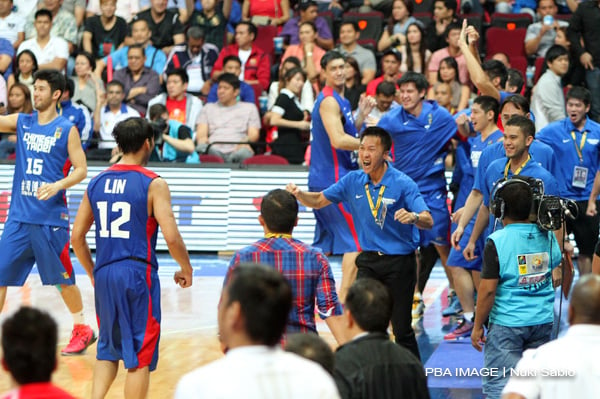 In this damp Saturday, Gilas Pilipinas was dejected losing a game that it wanted to win badly.

Coach Chot Reyes offered profuse apologies to the nation, especially to the Filipinos based in Taiwan after the game.

“I apologized to our countrymen in Taiwan. We wanted to win this for them because I know they’ve been a victim of a lot of abuse,” said Reyes.

The sweet-shooting Chinese Taipei squad stole the show from the home team, pulling off an 84-79 win to gain top place in Group A at the close of the first round of preliminaries in the 27th FIBA Asia Championship at the Mall of Asia Arena in Pasay.

Lu Cheng Ju, Lin Chih Chieh, Tien Lei and Tseng Wen Ting combined for an excellent 15-of-26 three-point shooting that led to the Taiwanese’s three-game sweep in Group A play.

Gilas finished second with victories over Saudi Arabia and Jordan.

The goods news is that placing after the second round is the most important.

Team Phl will be grouped with Chinese Taipei, Qatar, Japan, Hong Kong and either Jordan or Saudi. The top four from among the six make the knockout stage versus the top four from the other bracket which would likely be Iran, Korea, China and Kazakhstan.

Still, the loss felt like being stranded in the flooded Sampaloc area during the heavy Saturday downpour.

By the third quarter, the crowd of almost 20,000 was ecstatic with Gilas Pilipinas seizing control, 68-55.

The Taiwanese, however, wouldn’t give up, snatching the game in the end on a fourth-quarter comeback spiked by five three-pointers.

They surged ahead to stay at 81-77 on back-to-back treys by Tseng and Lu.

Gilas yet again got off to a tentative start but established rhythm in the second quarter and grabbed a one-point lead, 43-41, lead at the half.

Fonacier and Jimmy Alapag provided the needed spark coming off the bench and Gilas came through with a key assault to wipe out an 11-point deficit and storm ahead, 41-38 with 2:09 left in the second period.

Earlier, Iran, Qatar and Kazakhstan completed their sweeps in their own groups.

The Iranians reigned supreme in Group C, tucking away a perfect 3-0 record after pummeling a Yi Jianlian-less Chinese team, 70-51.

Chinese coach Giannakis Panagiotis said he continued to rest his main man to make it sure he’s ready for the knockout stage.

Minus Yi, the Chinese became easy prey for Hamed Haddadi and company, now looking cinch to be the top seed from Bracket C-D going to the do-or-die games.

Korea eased out any complication in Group C play in trouncing Malaysia, 80-58. The Koreans wound up the second best team in the group with the Chinese settling for third.

Kazakhstan ended up the mighty ruler of Group D as it repulsed India, 80-67, while Qatar finished on top in Group B after whipping Hong Kong, 87-64.