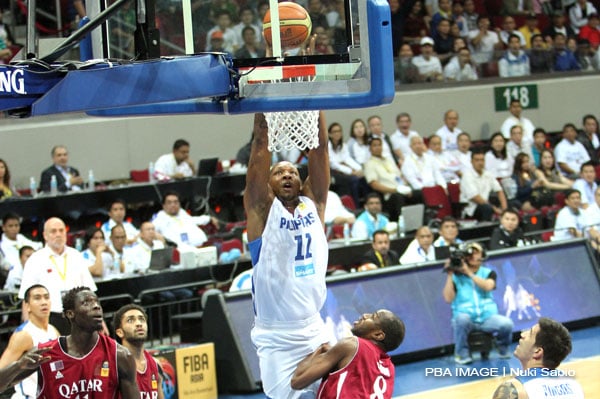 GILAS Pilipinas overcame a tough Qatar squad Tuesday in a game that should possibly prime it up for a tough quarterfinals opponent in the 27th FIBA Asia Championship at the Mall of Asia Arena.

An 80-70 win over previously unbeaten Qatar Tuesday was the second straight for the Filipinos and lined them up for a possible finish as second-best team in Group E and among the top four from the bracket proceeding to Friday’s quarterfinals.

In all, Gilas and Qatar are now tied at 3-1, lying just behind 4-0 Chinese Taipei and such a tie, if it stays at the end of the second round of eliminations Wednesday, would be broken by the winner-over-the-other rule.

The Filipinos could even emerge group topnotcher should they win as expected over Hong Kong Wednesday and the Gulf champions beat the Taiwanese at the end of the second round of eliminations Wednesday. The three-way tie at the top would be broken by quotient.

The latter scenario is something that’s farthest from the mind of national coach Chot Reyes, who could only grudgingly admit what is fast firming up as the most distinct possibility as China is poised to take third in Group F.

“Pending a miracle I think we have just arranged a meeting with China in the quarterfinals,” said Reyes, also acknowledging there’s nothing they could do but brace up.

“If it so happens, so be it,” added Reyes. “We just have to find a way to play like this (versus Qatar) against China to have a chance.

“We have to prepare and prepare hard for the biggest battle of our tournament, in the quarterfinals.”

Marcus Douthit scored 19 points and had 14 rebounds to lead Gilas, which erected two 23-point leads but still had to do a lot of scrambling before coming out ahead.

Douthit actually saw limited action in the last 14 minutes after injuring his right shin during an inside scramble in the third period, but briefly returned to help the likes of Jayson Castro, Jeff Chan and Japeth Aguilar bring the team home.

Qatar clawed to within 67-74, but only on two points inexplicably awarded by a referee on what seemed like an inadvertent whistle, 54.7 ticks left.

Any queasy feeling was eased when the Qataris went on a fouling spree to stop the clock but to no avail. Castro canned two charities, Chan laced a 12-point game with another freebie and Aguilar capped his finest game of the tourney yet with an alley-oop dunk off Castro’s find that made it a very safe 80-67 count, only 4.0 seconds left.

“I congratulate Team Philippines, they deserve to win tonight,” said the American strategist. “They taught us a lesson on how to play 40 minutes of intensity, especially in defense.”

Wisman specifically pointed out the second quarter as the start of his team’s meltdown as Gilas held Qatar to just nine points to go up by 47-29 at the half.

The absence of Douthit was exploited the most by Ali, who scored 11 of his points in the fourth before Hayes joined in to fan Qatar’s hopes. (NC)