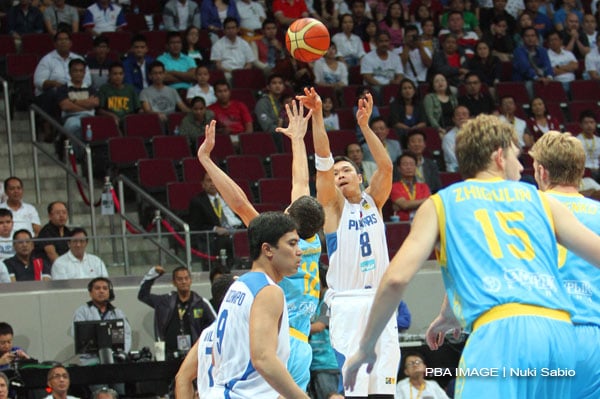 Gilas Pilipinas is a heartbeat away from making the 2014 FIBA World Cup cast of participants.

Making a big turnaround from its lousy performance against Hong Kong Wednesday, Team Phl sent Kazakhstan down to its knees, 88-58, to advance to the semifinals of the 27th FIBA Asia Championship at the Mall of Asia Arena Friday night.

The Nationals punished the Kazakhs on both ends and came away with their big victory cheered lustily by the mammoth crowd in the Pasay City playing venue.

“We put in a great effort on defense. But in the end, it was the support of the crowd that kept us going,” said Gilas coach Chot Reyes acknowledging the significant help of those in the gallery.

Getting past Kazakhstan, Reyes and his troops battle either South Korea or Qatar Saturday for a spot in the finale.

The Iranians, the heavy favorites to rule this regional world qualifier, exacted revenge versus Jordan, 94-50, in their own quarters rematch.

Winners in the Final Four Saturday automatically gain tickets to the World Cup in Spain next year. The last World Cup slot allotted to Asia goes to the winner of the bronze-medal game Sunday.

Gary David finally hit his strides and the rest had their shares in what’s easily Gilas Pilipinas’ finest showing in this FIBA Asia tourney.

The Nationals rattled the Kazakhs early with a defensive press and were as menacing on the offensive end in pulling away early at 32-13.

They hardly relaxed from there, and thus completed a wire-to-wire victory.

Weary by the second quarter, Gilas had its lapses pounded by the Kazakhs to charge to within six at 38-44.

The Nationals, however, restored a double-digit spread at 51-38 on a two-handed jam by Marcus Douthit, a trey from Gabe Norwood and two charities from Japeth Aguilar.

The Gilas second group — Aguilar, Castro, David, Ranidel de Ocampo and Larry Fonacier – worked on crucial defensive stoppages that they translated into successive breakaway layups as the Nationals again widened the gap, 67-49, at the end of the third.

The Nationals sustained the heat to the finish.