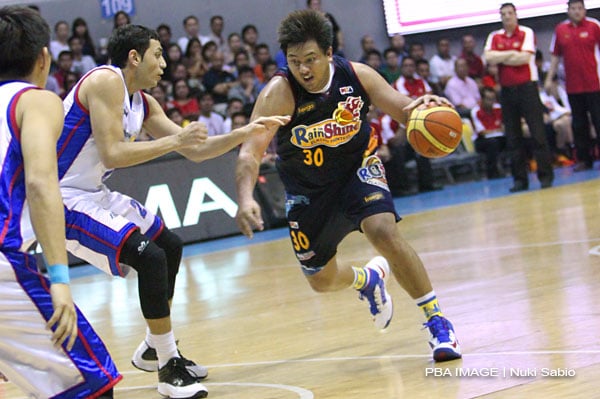 Sans head coach Yeng Guiao, Rain or Shine booked the first Finals seat in the 2014 PLDT myDSL PBA Philippine Cup Friday at the Smart Araneta Coliseum with a 97-88 Game 5 victory over Petron in their best-of-seven semifinal series, winning it four games to one.

“Making it to the Finals especially without coach Yeng makes this special,” said Rain or Shine assistant coach Caloy Garcia, who took over the reins for the game. “The players really wanted to win the game today.”

Beau Belga anchored the emotional win for the E-Painters with a near double-double of 18 points and nine rebounds.

Jeff Chan waxed hot in the third quarter, scoring seven of his 17 markers to erase a 12-point Boosters lead to a 72-69 edge at the end of the period. He also had nine boards.

“Sabi ko lang sa players, come second half, we have to be more aggressive sa defense. We’re playing good offense but the defense wasn’t there cause we’re giving too many lay-ups,” Garcia added. “We were able to stop that, and our shots started going in. We also got to the line more in the second half.”

Paul Lee came off the bench to score 16 points, while Ryan Arana chipped in 10 for the Elasto Painters, who have won 11 of their last 12 games.

“The system is the system. Kahit sino ang humawak sa amin, basta’t andyan yung sistema, its really for us to win. We’ve been doing this for the last 12 games and we just stuck with the system. The credit goes to coach Yeng,” Garcia said.

Guiao served his one-game suspension and watched the series-clinching victory in the confines of his Angeles City home.

The 4-1 series defeat equaled the worst best-of-seven loss of the Petron/San Miguel franchise.

Rain or Shine is on its second consecutive Finals appearance in the Philippine Cup, and is eyeing to erase the bitter memories of its 4-0 loss to Talk ‘N Text last season.

The Elasto Painters now await the victor of the other semifinal series between Barangay Ginebra San Miguel and San Mig Super Coffee Mixers, which is tied at two games apiece. (RL)