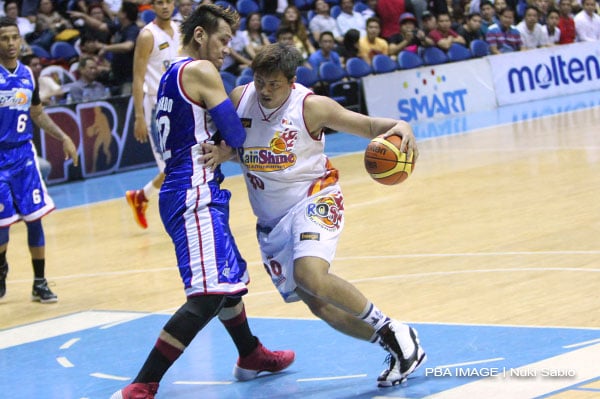 Coach Yeng Guiao is convinced that slotman Beau Belga’s improved game and leadership are the biggest reasons why Rain or Shine is back in the Finals of the PLDT myDSL PBA Philippine Cup for the second straight season.

The fiery Rain or Shine mentor said Belga has blossomed into a leader for his team, providing a solid defensive presence, strong rebounding and a mean perimeter game that easily extends the defense of the opposing team.

Proof of that is Belga’s Game Four endgame heroics, which saw the former Philippine Christian University drill in a three-point shot from the deep corner, helping the Elasto Painters seal an 88-83 victory to take a commanding 3-1 series lead over fancied Petron Blaze.

Belga then followed up his cold-blooded performance with an 18-point, nine-rebound game sans a suspended Guiao in Game Five on Friday to finally put an end to the Boosters’ title hopes with a convincing 97-88 win.

The Elasto Painters went on to complete a 4-1 semifinal series victory against the Boosters.

“Beau is learning to impose his presence not just on court but also off the court,” said Guiao, in describing his 27-year-old heavyweight big man’s contributions for the team this season.

Guiao wasn’t around to personally witness Belga’s fiery performance in Game Five after serving his one-game ban for incurring back-to-back ejections in the series.

Belga’s back-to-back solid games in the series earned the Accel-PBA Player of the Week for the period of February 3-9.

It was his second citation for this conference, beating out San Mig Super Coffee’s vastly improved playmaker Mark Barroca, who has been the Accel-PBA Press Corp. Player of the Week for the last three weeks.

Belga, selected seventh overall by Purefoods back in 2008, averaged 11.4 points, 4.8 rebounds and 1.4 assists for the Elasto Painters in the series.

He also played a huge role defensively, ensuring that Petron’s sophomore center June Mar Fajardo won’t get the easy baskets in the paint in the series.

While Belga is slowly emerging into a dependable big man with a decent shooting touch from the perimeter, Guiao is convinced that he’ll only get better in the years to come. (RD)