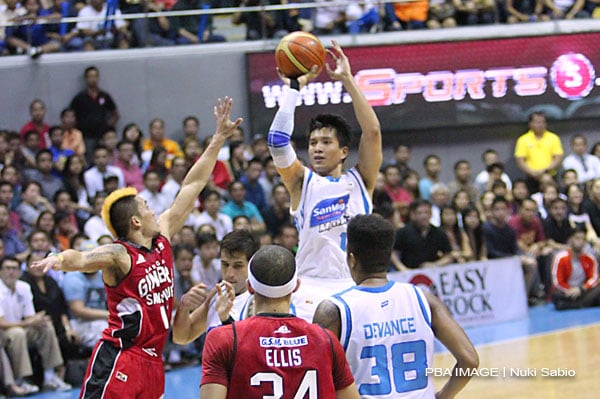 TURNED out San Mig Super Coffee was saving its best for last.

Getting off to a fine start and hardly slacking the whole game the Mixers completed a 110-87 demolition job on Barangay Ginebra Wednesday to advance to the PLDT myDSL PBA Philippine Cup championship series at the Smart Araneta Coliseum.

James Yap scored 30 points and PJ Simon added his own personal conference-high 28 points in a two-barreled attack by the Mixers that stoked their drive to the wire-to-wire win and into a 4-3 victory in the best-of-seven series.

It was the most lopsided triumph by San Mig in the matchup after winning Games 1, 3 and 5 by a combined total of 13 points and even coach Tim Cone was astounded with the way his charges played before a record 24,883 paying fans.

“There was too much James and PJ out there tonight, truly phenomenal. Shooting like that, no one’s gonna beat us tonight,” gushed Cone of Yap, who went 7-for-10 from deep, and Simon, who shot 11-for-15 from the field.

“I am kinda stunned. It was really a stunning performance by us,” added Cone.

And while Yap and Simon chiefly provided the firepower the other Mixers also did their share in foiling the Kings bid to make their second finals stint in the last three conferences.

Instead, it will be San Mig taking on early finalist Rain or Shine in a similar race-to-four matchup starting Friday, also at the Big Dome.

The Elasto Painters won their only other finals meeting with the Mixers during the 2012 Governors Cup but Cone believes his charges have what it takes to at least match coach Yeng Guiao’s charges.

“The last time we played Rain or Shine in a series it went to seven games. Honestly, we’re a bit better, a bit deeper now than we were then,” noted Cone. “We’re gonna go in there in Game 1 and see what we can do.”

Based on his fifth-seeded team’s most recent game against a Ginebra squad that topped the eliminations it seems Cone’s team has momentum on its side.

Mark Caguioa led the Kings with 23 points, Japeth Aguilar chipped in 17 and LA Tenorio scored all but two of his 16 points in the second half. But their collective efforts proved no match for the Mixers on this particular night.

Ian Sangalang and Rafi Reavis each scored 15 points and although they did not score as heavy, Marc Pingris, Mark Barroca and Joe Devance got the job done in terms of defense and hustle.

All those helped to spark and fuel the Mixers’ drive to several double-digit spreads right in the opening period and to their first 23-point lead at 107-84, only 1:54 to go.

“Great shooting,” said Cone after a look at the stats sheet. “Wow! I didn’t do anything tonight these guys did it all.”

Yap actually scored 24 points at the half while Simon and Sangalang started waxing hot in the third period to give San Mig a 79-67 cushion going to the fourth period.

But it was Reavis who propped the hot start Cone wanted by sneaking in for short stabs and even draining a jumper for 12 of his points in the opening quarter, including the team’s first eight points, which propped San Mig to the early lead.

When Ginebra’s defense started clogging the lane Yap took occasion to scatter 10 points of his own that helped give the Mixers their first 11-point spread at 26-15. (NC)