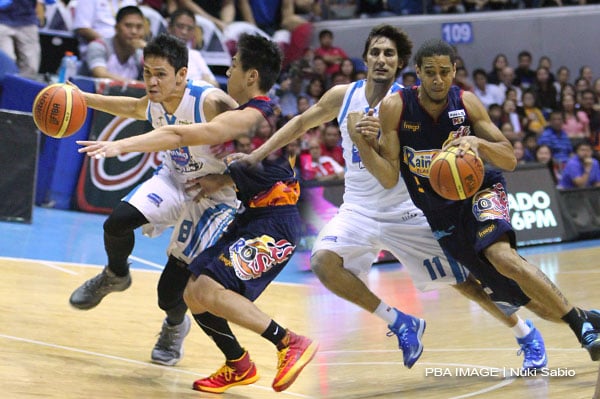 EVERYBODY seems tired at this point in the PLDT myDSL PBA Philippine Cup Finals.

The San Mig Super Coffee Mixers say they are tired, especially after a demanding semifinal series and five exhausting final games.  The Rain or Shine Elasto Painters claim as much: they too are tired – of hearing about it.

As things are, Game 6 at 8 p.m. on Wednesday could send both teams at death’s door.

The bone-weary Mixers lead the best-of-7 series, 3-2, after winning Games 2, 3 and 4, but appear to have little less than sufficient left in the tank.

The fed-up E-Painters, on the other hand, stayed the coming of midnight Sunday by denying San Mig in Game 5, taking a big upward spring from the hole they have fallen into at 1-3 and coming tantalizing close to forcing a winner-take-all showdown. But they too have shown signs of cracking.

Game 7 should take care of itself – if ever they get there. It is in this sixth game at the Smart Araneta Coliseum where both teams will have to put everything on the line.

By comparison, the E-Painters’ choice has been made for them. Left with no option but to fight for survival, they hope to reproduce the energy with which they razed San Mig three days ago, 81-74, to keep the multi-colored victory balloons and bags of confetti tethered in the Big Dome ceiling.

Jeff Chan woke up from stupor that evening to scorch the Mixers for 24 points, hitting a huge turnaround shot late in the game that made it 79-72 and slammed the door on San Mig’s comeback bid.

“I told the boys we can’t lose that sense of destiny. Even if we’re behind, it’s not over. We have to believe in ourselves and stay positive. A win like this can turn around the complexion of the series,” said ROS coach Yeng Guiao after the game.“We’ll try to delay or postpone the celebration of San Mig. If we can delay it enough, it can be our celebration.”

“Yeah, we’re tired. To say that we’re not tired is not fair. We’re tired but there is still something left in us to keep pushing,” said San Mig mentor Tim Cone a few hours before he reportedly lost his voice from all the shouting he did.

“We’re not just good enough tonight. We just don’t have the edge on our focus and concentration. But Game Six is Game Six. It’s an entity all by itself. So we’ll just take Game Six and not worry about what happened in Game Five and what will happen in Game Seven.”

Not exactly a bad idea, considering the Mixers had played well enough to win Game 5 and clinch the title.

They shot better overall, was a shade higher in rebounds, had superior free throw shooting percentage, and had more assists and shot blocks. But what they couldn’t overcome was 19 turnovers, from which ROS collected 20 points, and the E-Painters’ late-game outside shooting, highlighted by Gabe Norwood’s booming triple at the crunch.

Marc PIngris started when he shouldn’t after suffering a frightening eye injury while James Yap ignored nagging pain on the elbow of his shooting arm as both San Mig stars scored 18 points each. But PJ Simon, whose one-handed slashing jumpers have been a bane for the E-Painters, just took two shots in 31 minutes while rookie Ian Sangalang probably folded from the pressure by finishing with 3 points in 22 minutes.

Joe Devance also struggled with 3 of 12 from the floor in 34 minutes as the E-Painters clamped down on the Mixers shooters, holding them to 4 of 17 from 3-point range.

But everything has now been swept in the dustbin of a remarkable series that refuses to die and, in fact, grows more fiery with every game. By midnight Wednesday, either the smoke would have died down or the flames would be dancing still.

Without a doubt, players from both teams are aching all over at this stage, given the intensity and physicality by which their battle has been waged. But adrenalin will be pumping in their veins come game time when the roar of 20,000-plus fans sweeps over them in deafening decibel, charging fading batteries and boosting failing strength.

Game 6, not Game 7, could ultimately decide the outcome of this draining, long-drawn series. (WJRHT)