Game 1 win important, but we have a long way to go — Casio 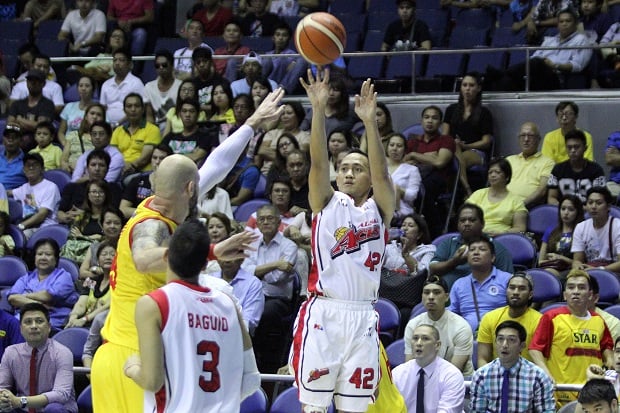 In classic Alaska fashion, the Aces came back from an 18-point hole and stunned Star, 97-91, to take Game 1 of their best-of-5 semifinals series in the 2015 PBA Governors’ Cup on Wednesday.

And at the forefront of that barrage was JVee Casio, who finished with 18 points on a 2-of-4 shooting from threes to will Alaska to the victory.

Though coming back from the dead has always been a staple in wins for the crew of coach Alex Compton, Casio admitted that pulling it off wasn’t an easy job to do.

“It’s tough. Mahirap yun. Pero I think it’s just that we just keep on playing, stay together, and play Alaska basketball,” he said.

It also was the first of what promises to be a hard-hitting series between two squads  whose history go way back. Casio said the team is aware of that, but they are just focusing on the bigger things.

“We’re playing to win. We want to go to the Finals and I think it’s the same with them. On our part, we just stick with what we do and we want to win,” said the top rookie pick in the 2011 Draft.

The former national team member knows the gravity of winning the first game of the series, but Casio knows that the duel is just getting started.

“Important naman yung Game 1. You always want to get ahead, but it’s not over and done with,” he said. “We’re looking forward to Game 2 right now. They’re a very good team, very experienced, a champion team, so we really want to take that next game.” (RL)