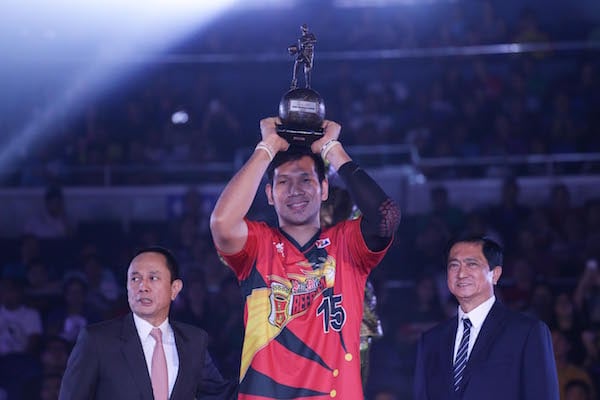 For the second straight year, June Mar Fajardo bested all his peers to be the biggest toast in the annual PBA Leo Awards.

“Kailangan may subtitle ang TV nyo, magbibisaya ako,” Fajardo said in jest as he once again shared his award to his beloved alma mater University of Cebu and younger brother Jay.

He was all smiles at the end of the season awards night where he won four Leo Trophies to underscore another dominant season.

Fajardo has distinguished himself literally and figuratively the giant of his time with a second straight MVP trophy.

Earlier in the season, Fajardo, 25, bagged two Best Player of the Conference awards and won a first championship with the Beermen in the all-Filipino tourney. They’re also on line to win the season-ending Governors Cup.

The 6-foot-10 Cebuano behemoth has emerged the league’s most dominant player since Danny Ildefonso also reigned as MVP for two successive seasons from 2000, winning three straight crowns for San Miguel along the way.

Others who have won the coveted individual award more than once are Ramon Fernandez, Abet Guidaben, Benjie Paras, Willie Miller and James Yap.

Fajardo handily beat Talk n Text’s Jayson Castro and Barangay Ginebra’s Greg Slaughter for the MVP award, and made both the Mythical First Selection and the All-Defensive Team.

He received a fourth ware as winner of the Sportsmanship Award.

Another Beermen in Arwind Santos and Rain or Shine combo guard Paul Lee joined Fajardo, Castro and Slaughter in the Mythical First Five.

Romeo and Pringle earned separate Leo Trophy as the Most Improved Player and the Rookie of the Year.

Fajardo and Norwood were returnees from last year’s defensive roster. Seeing the end of a streak of inclusions in the team was Marc Pingris.

From the Mythical Selections last year, back in the lists this year are Fajardo, Castro, Taulava, De Ocampo, Lee and Slaughter.