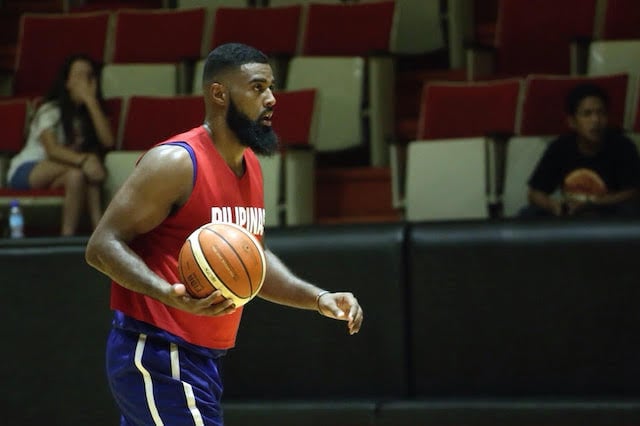 Moala Tautuaa will be getting a lot of playing time in the Jones Cup with the absence of Andray Blatche. Tristan Tamayo/INQUIRER.net

TAIPEI – Minus Andray Blatche, Gilas Pilipinas is determined to achieve its mission in the Jones Cup, hoping to get in best shape possible for the 2015 FIBA Asia Championship on Sept. 23-Oct. 3 in Changsha, China.

The Gilas pool will be without Blatche for most, if not all, of the games here as the 6-foot-11 naturalized player rushed home in the US Saturday to pay his last respects to his departed uncle and be with his ailing mom.

Blatche stayed here for just one night, attending one practice before leaving a few hours before the start of the nine-team, eight-nation annual invitational tourney here.

Gilas opens its campaign against the home team at 7 p.m. Sunday – a match that will evoke sad memories of the Nationals’ stunning loss to the Taiwanese during the prelims of the 2013 FIBA Asia in Manila.

National coach Tab Baldwin tried to play down history, saying a match with Chinese Taipei will matter not here but in Changsha.

Baldwin insisted the Gilas pool will move on minus Blatche.

“We have chips on our shoulder. But that’s life. We have to keep better with whoever we are, whoever we have, cross our fingers and hope for the best,” he said.

“The team is very determined to prove everybody wrong and go against the seeming bad luck that has gone our way,” he also said.

“We want to win every game, but the priority is to keep improving; to see us play with fighting spirit, be tactically more comfortable with our system,” he added.

Chinese Taipei is practically the same team that created stirs in the Manila meet, including a breakthrough win over China in the quarterfinal round.

In the absence of Blatche, Tautuaa is expected to play a lot of games here and so are De Ocampo and Pingris as they rejoin Gilas.

The Jones Cup ends Sept. 6, two days before the deadline for submission of the 12-man lineup for the Asian meet that doubles as the regional qualifier for the 2016 Olympics in Rio de Janeiro.

“By the time we finish here, we want to have a very firm idea of who our 12 are,” said Baldwin.

After the Jones Cup, the Gilas pool had gone through a month-long training with a total of 11 games played, including three in a pocket tournament in Estonia.