Not backing down, Gilas Pilipinas wins physical encounter with Russia 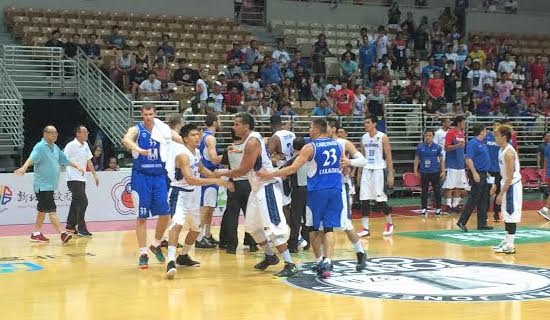 The two benches emptied as some of the players from Gilas and Spartak Primorye of Russia reached their boiling point during a highly-physical affair Tuesday. INQUIRER PHOTO

TAIPEI – Gilas Pilipinas came back strong from a loss to South Korea last Monday, standing its ground in a rugged duel with Spartak Primorye and pulling off an 85-71 win in the 2015 Jones Cup at the Xinchuang Gymnasium here Tuesday.

The Nationals pummelled the Russians in the second half, leading by as many as 19 points, 84-65, before completing the win that sent Gilas back in contention in the nine-team, eight-nation tourney.

Gilas put up a solid fight together, beating out Spartak Primorye in a match marred by a near free-for-all just at the start of the game.

Russians Aleksei Goliakhov and Alimdzhan Fediushin and Terrence Romeo were all called a technical foul after the melee sparked by a hard foul by Goliakhov on the Gilas rookie playmaker.

In an earlier play, Sonny Thoss sustained a cut on his head on a wayward elbow by Fediushin. Five staples were used to close the cut and Thoss sat out the rest of the game.

The Filipinos, however, never backed down from the physicality of the game, fighting back but staying composed to pull off a first win by the Philippines over a Russian team in a long while.

“Had they backed down from them, they would have to confront me,” said Baldwin on the physicality dealt with by his players.

“Everybody had to play. They made mistakes. Our game was not polished but everybody stepped up and contributed,” said Baldwin.

Thoss was limited to two minutes due to the injury sustained at the outset of the game. Jimmy Alapag, on the other hand, played just a little over five minutes.

Taulava held the fort on the exit of Thoss, putting in seven points, six rebounds and one assist. (SB)