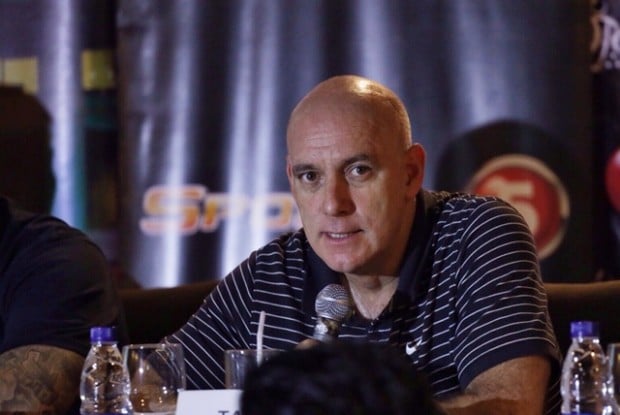 First up for Gilas is Talk n Text on Friday, the Kiwis on Saturday and the Taiwanese on Sunday in the four-nation, three-day pocket tourney culminating Team Phl’ 14 warm-up matches for the Changsha FIBA Asia that doubles as the regional qualifier for the 2016 Olympics in Rio de Janeiro.

The opening day pits the Kiwis versus the Taiwaneseat 4:15 p.m. then the Nationals against the Tropang Texters at 7 p.m.

The MVP Cup is a special event featuring Gilas Pilipinas with the very lineup coach Tab Baldwin will bring to battle in the 2015 FIBA Asia Championship slatedSept. 23-Oct. 3.

Baldwin rotated a 17-man pool against Estonia, Iceland and the Netherlands in the Toyota Four Nations Tourney in Tallinn, Estonia then shuffled 16 men minus Andray Blatche in the Jones Cup in Taipei.

In the MVP Cup, the Nationals tangle with the Taiwanese and the Kiwis once again with Blatche in the Gilas lineup. Team Phl repulsed both teams on the way to a second-place finish behind Iran in the Jones Cup.

Gilas Pilipinas and Chinese Taipei have split their last two games with the Taiwanese pulling the rug from under the Filipinos before a stunned home crowd at the MOA Arena during the FIBA Asia preliminary round in 2013.

Featuring naturalized player Quincy Davis and an array of shooters, the Chinese Taipei quintet was fourth placer in the last FIBA Asia and wound up third behind Iran and Team Phl in the recent Jones Cup.

The Wellington Saints can’t be taken lightly either as they’d shown in their own Jones Cup stint. Gilas banked on the heroics of Jayson Castro and Dondon Hontiveros in the clutch to survive a tough overtime grind versus the Saints, 92-88.

Talk n Text is fresh from a stint in an invitational tourney in South Korea and will now be playing with PBA Rookie Draft acquisitions Moala Tautuaa and Troy Rosario.

The MVP Cup is the lone event where the Filipino fans will be able to watch Gilas live in action. Tickets to the games are now available in all Ticketnet outlets andwww.ticketnet.com.ph. Games will also be aired live on TV5. (SB)