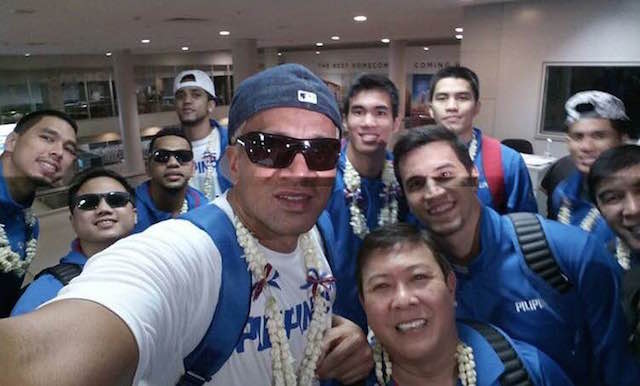 Gilas Pilipinas center Asi Taulava takes a selfie with the rest of the Philippine team upon their arrival at NAIA on Monday. Photo taken from Asi Taulava’s Instagram account

Gilas Pilipinas is back home after bagging the silver medal in the recently-concluded 2015 Fiba Asia Championship held in Changsha, China.

The Philippines fell short of its goal to earn a slot in the 2016 Rio Olympics after bowing to China, 78-67, in the final on Saturday.

Though Gilas failed to bag the gold medal, the team still did the country proud during its campaign.

The Filipinos opened the tournament with a shocking loss to Palestine but they quickly put that painful experience behind, bouncing back with lopsided wins over Kuwait and Hong Kong before continuing their winning ways in the second round against Japan, Iran and India before turning back Lebanon in the quarterfinals and Japan in the semifinals.

One of the highlights of Gilas’ Fiba Asia stint is its 87-73 victory over the Iranians. And against the hosts, the Filipinos gave all they could amid a hostile environment and despite not getting the fair shake as far as the officiating is concerned.

Read Next
Jayson Castro named to Fiba Asia Mythical 5 again
EDITORS' PICK
Sex on the menu for Pogo workers
First female commodore named
Foreigners prepare to flee as China virus toll tops 100
We Can’t Guarantee You’ll Win a P20 Billion Jackpot, But We Can Help You Try
SM continues to send relief assistance to remote towns in Batangas
Best Gift Ideas in the Philippines
MOST READ
Sex on the menu for Pogo workers
‘Normal people doing normal work’ need not wear mask – WHO official
Kobe Bryant gear pulled out of Nike online store in wake of his death
Lacson on VFA impact study: ‘Better late than never’
Don't miss out on the latest news and information.