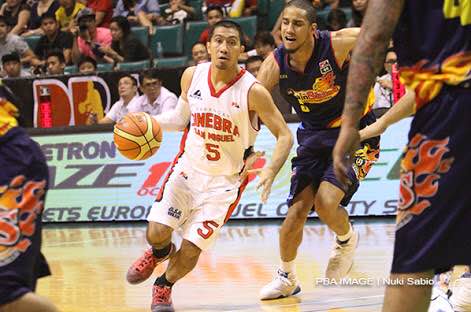 Barangay Ginebra can’t afford to let its guard down every game in the 2016 Smart Bro PBA Philippine Cup with the rest of the field more driven in beating the most popular team in the league than any other squad.

The reality was not lost on LA Tenorio Sunday night when the Kings got bamboozled by reigning champion San Miguel, 100-82, in a game expected to be a thriller but ended up as a rout after the Beermen pulled away for good in the second half.

“Every game kailangan we have to realize lahat ng mga teams will play their A-game against us, kasi pumped up sila because of the crowd, Ginebra eh,” said the point guard out of Ateneo.

Tenorio said head coach Tim Cone had to remind the Kings about that extra motivation other teams have every time they’re up against Ginebra in the dugout following their blowout loss to the Beermen.

“Siyempre disappointed din siya (Tim Cone). But the thing is, he made us realize that teams will play their best game (against us). Extra motivated sila, especially with coach Tim around. Feeling nila malakas yung team namin,” he said.

“Kahit anong team yan, Barako, Mahindra, Blackwater, Talk ‘N Text, San Miguel, they’re always ready for us. Kaya we have to be ready, too.”
And on this night, it’s the Beermen who came prepared and focused.