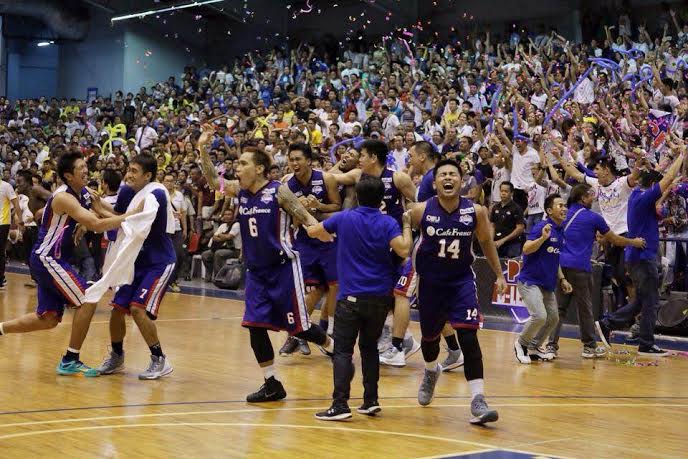 The Cafe France Bakers made history last season when it outlasted the Happy Fresh Fighters in a thrilling Game 3 of the Foundation Cup Finals to win their first ever PBA D-League title. Tristan Tamayo/INQUIRER.net

Cafe France aims for another championship while eight other teams try to go all the way as the latest PBA D-League season unfolds this month.

The nine teams disputing for the first conference title will play a single-round elimination format.

Game days will be held on Mondays, Tuesdays, and Thursdays.

Tiebreaks will be broken via the PBA quotient system.

Eight teams advance from that point, with the top four earning a twice-to-beat advantage in the quarterfinals.

Winners move on to play in a best-of-three semifinals with the victors fighting for the crown in a best-of-five duel.

Caida, bannered by this year’s top pick Jason Perkins, will open the sixth season against a hungry Tanduay Light squad in the curtain raiser at Filoil Flying V Arena in San Juan at 2 p.m., following the short opening ceremonies at 1 p.m on Jan. 21.

UP QRS-JAM Liner and BDO-NU, meanwhile, renew their UAAP rivalry to end the opening day twinbill at 4 p.m.

The Bakers will begin their campaign against the Mindanao Aguilas crew on Jan. 25 at Ynares Sports Arena in Pasig at 2 p.m., followed by the tussle between Phoenix Petroleum-FEU and Wangs Basketball at 4 p.m.