‘We value each other,’ says Santos of San Miguel’s chemistry
Close
menu
search

‘We value each other,’ says Santos of San Miguel’s chemistry 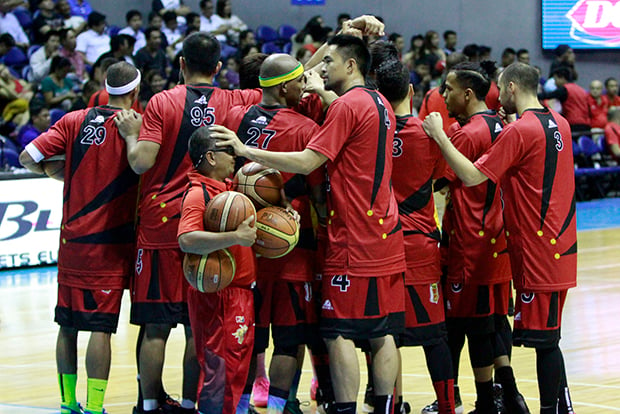 “We value each other.”

As simple as that, concluded one-time MVP Arwind Santos as San Miguel’s increased teamwork was evident in its last two victories in the PBA Philippine Cup semifinals.

When before it was all June Mar Fajardo from Games 1 to 3, for succeeding matches it became apparent San Miguel did not win on the back of the Kraken alone—the Beermen won as the Beermen.

“I’m happy with June Mar, with our teammates, because we value each other, and we all know every single one of us can contribute,” Santos said Wednesday at Smart Araneta Coliseum. “That’s how I look at my teammates.”

Santos finished with 12 points, five rebounds, and three blocks as the Beermen dispatched Rain or Shine, 103-94, in Game 5 of the series.

Even though he took the MVP award the year before Fajardo racked up his, Santos acknowledged the dominance of his teammate and he knows he’s there to support the Kraken.

“June Mar’s dominance, we know it can’t be stopped,” Santos said. “For us, and especially for me, he’s the MVP and as long as we’re together, for me, I’m the best supporter for him.”

“I tell him if there are times he has the ball, he should not force it because he will get more fatigued or worse he might injure himself.”