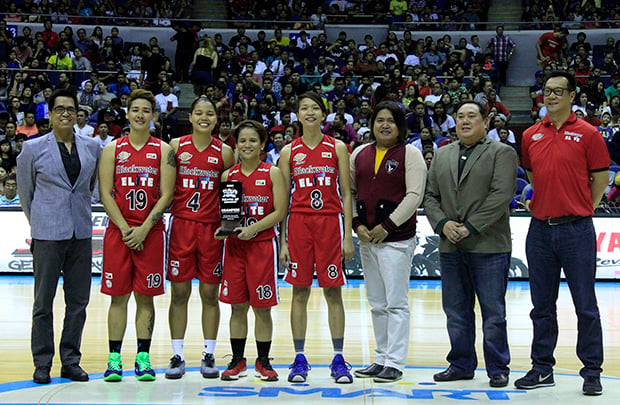 Blackwater may have just wrapped up the recently-concluded PBA Dickies Women’s 3-on-3 Tournament as champions, but for women’s basketball, this is only just the beginning.

“It’s definitely a big opportunity because we, women, don’t get as many opportunities as such in a semi-pro basketball league like this. We really enjoyed the opportunity,” said Ginebra’s Micaela Bautista. “I think the whole point of this is to advocate for women’s education when it comes to basketball.”

Blackwater swept Ginebra in their best-of-three Finals, while NLEX finished at third place by topping Alaska. All four teams had a player or two who had previously suited up for the national team, and for these girls, they are happy to serve as trailblazers for the sport.

Alaska’s Denise Patricia Tiu added, “Once they saw it happening, everyone started talking about it. They’re all excited for a league like this.”

Majority of the players who participated in the inaugural conference of the women’s 3-on-3 tournament admitted that this became an avenue for them to continue their hoop dreams after wrapping up careers in their respective collegiate and intramural levels. But more than anything, the biggest accomplishment of the tournament could be on the spotlight it gave to women ballers who were, more often than not, overlooked compared to their male counterparts.

“It’s really a big deal for us, for all the girls because they see now that people are paying attention to women’s basketball. All the girl athletes are excited for the next stretch,” said Tiu.

With the foundation already set, these ladies are just wishing that the interest for women’s basketball continues to blossom and hopefully, in the future, opens up a chance for a women’s 5-on-5 league will be set.

“I think the biggest dream would be to have a 5-on-5 tournament,” said Bautista. “Iba talaga when we play 5-on-5 eh, and it’s really exciting.”

Tiu chimed in, saying, “Once they push the next 3-on-3 Tournament and see how many girls tryout, then maybe they’ll consider doing the 5-on-5.”