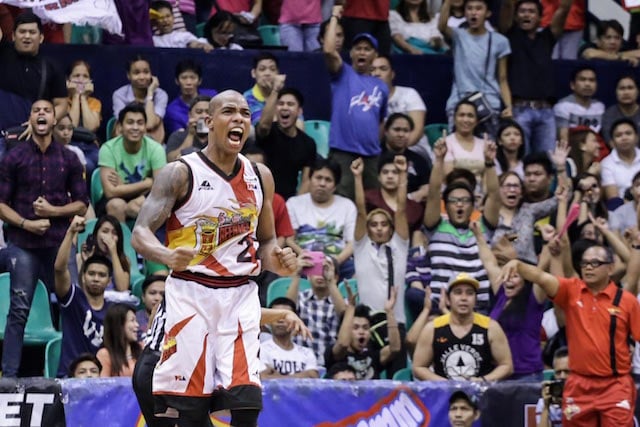 Facing elimination and still without its best player for the fourth straight game, San Miguel Beer needed someone to step up.

Gabby Espinas was that player for the Beermen, who got a huge lift from their backup center in Game 4 of the 2016 PBA Philippine Cup Finals.

“Ako lang, nasa utak ko lang mahirap ma sweep, yun talaga,” Espinas said Sunday night after being one of his team’s heroes in a dramatic 110-104 overtime win over the Aces at Philsports Arena.

Espinas fouled out before he committed his last foul, he had already given all he could with 21 points on 8-of-12 shooting from the field and 14 rebounds in 33 minutes off the bench.

Of his 21 points, none were bigger than his three-point play at the 1:40 mark of fourth quarter that pulled San Miguel to within a point, 93-92, after trailing by 11 points in the last 3:30 of regulation.

Espinas admitted playing against his former team in Alaska serves as an added motivation.

And with Fajardo still unavailable until a potential seventh game, all Espinas and the team could do is to buy the reigning back-to-back MVP more time to recover from his knee injury.