Struggling Santos comes through for Beermen in Game 4 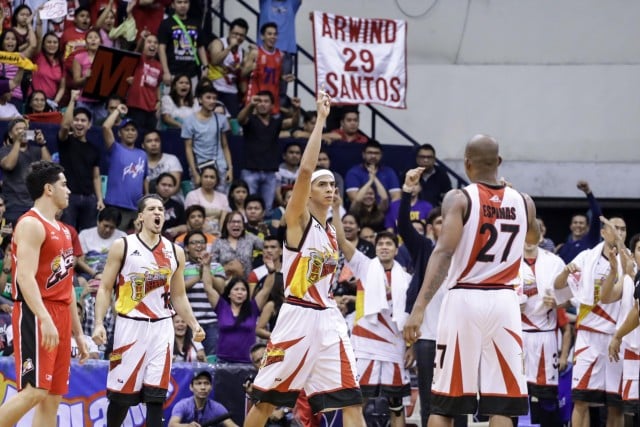 In last year’s all-Filipino final, the San Miguel Beer forward was the Game 7 hero and Finals MVP, but coming into Game 4 of this season’s championship duel, he has been the bearer of criticisms.

Santos’ first two games saw him commit a total of 12 fouls and shot a combined 6-of-24 from the field. His third game wasn’t even close to an improvement, in fact, it was his worst offensively — going 3-of-17 from the floor with six turnovers.

But just when Santos was about to be counted out and his team on the verge of getting swept, the 2013 MVP showed up.

Santos still shot poorly but he posted his first double-double of the series with 11 points and 12 rebounds that went with three steals and three blocks and was even present in the clutch situation.

Down one, 93-92, in the waning seconds of regulation, the Beermen needed a hero and they found one in their captain.

Santos gave his team the lead, 94-93, when he followed up his own miss with only 28 ticks remaining as part of San Miguel’s 14-0 run after trailing by as much as 11 points with 3:30 left in the fourth quarter.

He did miss two free throws with 5.4 seconds to go in regulation and even though the Aces forced OT on Cyrus Baguio’s 3-pointer at the buzzer, the game would’ve seen a different result if it wasn’t for Santos’ basket.