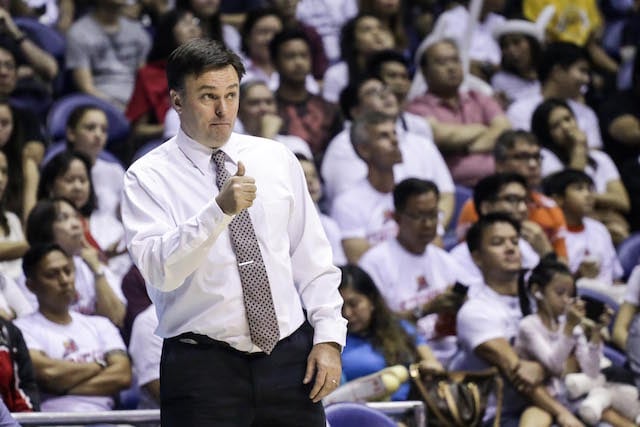 It has been a tough week for Alaska head coach Alex Compton.

In just a span of seven days, Compton’s Aces went from a win a way to a championship to one loss shy of completing the biggest collapse in PBA history.

And just when it seem that it couldn’t get any worse for Compton, he got into an accident a day after Alaska dropped another overtime to San Miguel in Game 6.

“I was in a certain area walking to the entrance of somewhere and a glass door just broke and fell on my head, knocked me down,” Compton said. “I had some cuts on my body, and I was sitting there a little dizzy at first, my head hurt and bleeding a bit.”

That moment, though, led Compton to realize something.

“But all I was thinking was breakthrough. That was the breakthrough we needed. We broke through the glass. I’ll take some lucks with my team, but I’ll take it as a breakthrough, a prophetic sign.”

Compton and his Aces will have to reboot and compose themselves for one last time as they vie to close the series out on Wednesday night in Game 7 at Mall of Asia Arena.

“It’s a one-game knockout for the All-Filipino Championship. It’s like deja vu all over again. We’re back on Wednesday in MOA against the best team in the league, which has the momentum on their side, and they’re rested, with their best players healthy,” he said.

Compton knows he and the rest of the Aces have encountered such adversity before.

“The only other times we lost three straight was last conference in the Finals against San Miguel and my first conference when we’re still trying to establish our program.”

“That’s something you don’t get used to as a competitor. I don’t like losing, but were playing a great, well-coached team. Stuff happens. How do you respond? It’s always our challenges as coaches, to see guys get life lessons from stuff. I hope we get it and step up.”

The American coach also didn’t offer any excuses on why Alaska lost its huge advantage early in the series, but rather, tasked his players to remember the hunger they had which made them successful from the start.

“We got to play. We have no excuses for the hole we’re in. We’re playing an excellent, well-coached team that has played in the last three games. It’s a one-game toss-up. We’ll see what happens,” he said.

“I get excited about this stuff,” he said. “I have a hard head. I’m a believer, I firmly believe in my guys and I love the fact that I got a chance to coach them. My guys are such a great group to coach and I hope I can deliver for them and we play a great game.”