Finals MVP Ross on SMB comeback: ‘There was never any doubt’ 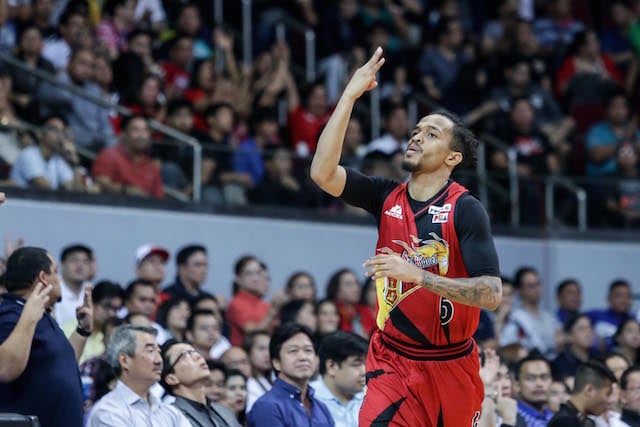 San Miguel Beer guard Chris Ross reacts after hitting one of his four 3-pointers in a 96-89 win over Alaska in Game 7 of the 2016 PBA Philippine Cup Finals on Wednesday, Feb 3, 2016, at Mall of Asia Arena. Tristan Tamayo/INQUIRER.net

“There was never any doubt,” he said. “Even when we were down 0-3, I couldn’t picture those guys celebrating the championship, not on our expense. I just knew the type of guys that we have in the locker room that we could win.”

Pressed to defend its Philippine Cup title, the do-it-all guard kept San Miguel fighting. May it be looseballs or rebounds, Ross made sure he will be able to give the Beermen a chance to at least win one against the mighty Alaska squad.

“Those three games, we’re in it and had the opportunity to win at the end. We just didn’t make the plays,” he said. “We just needed that one game to put us over the top, and the big fellow came back and that’s a big help also. It’s just the group of guys that always believed and never really had any doubt.”

San Miguel did get one, then another, and just when everyone thought the series was over, the Beermen had racked up four straight wins to rewrite history and become the first team to weather a 0-3 deficit and win the series — snaring the 2016 Smart Bro PBA Philippine Cup title with a 96-89 thriller in Game 7.

Averaging 8.4 points, 4.6 rebounds, 4.0 assists, and 1.7 steals in the series, Ross’ impact was felt past the stat sheets, enough for him to earn the citation as the Cignal-PBA Press Corps Finals MVP.

“I couldn’t have done it with a better group of guys. Everyone believed when we were down 0-3, and it’s just amazing to do it with this group of guys,” he said, praising the whole San Miguel crew in giving him the boost he needed to showcase his talents. “They had faith in me, in my skills, in my abilities. From the coaches’ to the players’ and the bosses’ trust in me, it’s a better atmosphere when everyone has trust in each other.”

Notching a conference-high 21 points, on a 4-of-6 shooting from threes, five rebounds, and five assists in the clincher, the Game 7 showing also serves as a validation for the defensive playmaker.

“A lot of stuff that I do don’t show up in the stat sheet,” Ross continued. “Today, I had a big scoring game, but I get joy when my teammates are doing well, if they are scoring and making the game-winning play. Today, it just happened to be me, but I couldn’t do it by myself. It’s a team game and they helped put me in the right position and I was able to take advantage.”

Still, the experience was unforgettable for Ross, who, together with the rest of the Beermen, stayed together and completed what appeared to be an improbable feat.

“If God brings you to it, you can make it through. That’s one of my mottos. There’s never an obstacle too tough to climb. If you can’t get over it, you have to get through it. That’s what we embraced in this team this series, and so does my whole life.”