Compton on three early timeouts: I just didn’t feel like playing yet 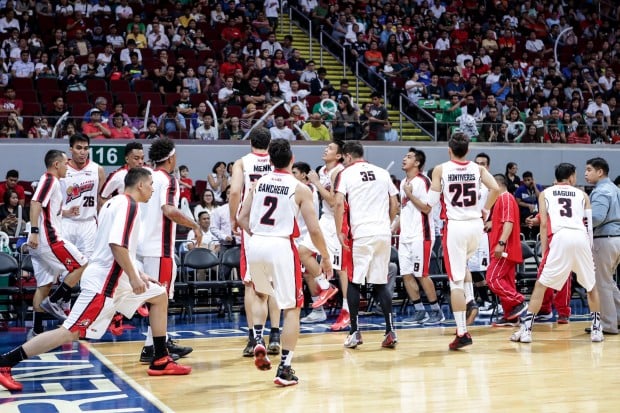 Alaska during one of its early timeouts. Photo by Tristan Tamayo/INQUIRER.net

Amid a do-or-die game, Alaska head coach Alex Compton committed a move that left onlookers inside Mall of Asia Arena and fans watching from their television sets dumbfounded—-burn three timeouts in the first second of Game 7.

A devastated Compton later didn’t disclose the exact reason behind the move, which saw his players just do warm up drills as they burned time, but admitted it had something to do with not  being into game mode yet.

“I just didn’t feel like playing yet,” Compton said, as he still comprehended the lost series. “Freeze them, okay that’s possible, break the rhythm. I thought you guys would’ve the answer right away, maybe that’s one I’ll have to keep to my vest and see if you guys find out if I do it again.”

“I felt it worked in our favor and that’s all I was trying to do to tip the scales in our favor in anyway possible, you’re trying to get an edge,” Compton said.

Compton has experienced heartbreak twice at the hands of the San Miguel Beermen, and the 2016 PBA Philippine Cup Finals wasn’t exactly a charm even though his Aces held a seemingly insurmountable 3-0 lead.

Alaska was set for history as the Aces trampled the Beermen to a helpless heap of nothing at the start of the series but it was San Miguel who would put its name in the PBA annals as Compton and company was left to rue what happened to their temporary dominance.

Compton, nonetheless, did not throw his team under the proverbial bus, owed up to the loss and congratulated San Miguel on the win.

“I love my guys, they did not roll over and die. I wish I could’ve gotten them a few more baskets, a few more points,” Compton said. “San Miguel deserves a lot of credit. Excellent team, well run, well-coached, very talented. Congratulations to them they deserve it.”