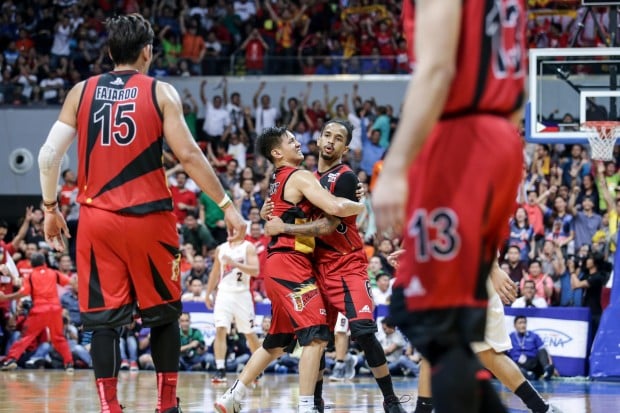 San Miguel Beermen celebrate a point as they are on the brink of making nabbing the PBA Philippine Cup crown. Photo by Tristan Tamayo/INQUIRER.net

“Miracles are just around the corner.”

Coach Leo Austria still could not believe the way things worked out for San Miguel in the 2016 Smart Bro PBA Philippine Cup Finals.

Down 0-3 in the series, the Beermen came back from the dead and made history, copping their 22nd franchise title in the most bizarre way possible.

Already on the brink of surrendering its title to Alaska less than four minutes in Game 4, San Miguel displayed the heart of the champion, fighting back and snaring the 110-104 overtime win to avoid a sweep.

Riding that momentum, the Beermen moved forward and took the next games, capped off by an awe-inspriring 96-89 Game 7 clincher on Wednesday.

Austria emphasized the importance of Ross, last season’s Defensive Player of the Year, in this historic run, as he kept San Miguel fighting through the course of the series.

“I told him before this game that his leadership is very important. Your pressure defense and your leadership is ok, but the good thing is he kept on scoring. That’s why for me, it’s a big bonus for the team. Every time he hit the three, lahat nagtatalunan kasi unexpected yun. Pati siguro Alaska, nagulat,” said the coach, as Ross went 4-of-6 from threes too finish with a conference-high 21 points, alongside five rebounds and five assists.

Austria is also glad that Ross was rightfully named as the Cignal-PBA Press Corps Finals MVP, saying that he’s been a perfect fit for his system.

“I’m happy for him because ever since I’ve been looking for a point guard who can be an extension of the coach sa court.”

“What we saw from him, he really understood his role. Many people say that he can’t hit from the three point area, but because of his three points, I think that’s the turning point of Game 7. From there, yung players na-encourage at nagkaroon ng kumpyansa at na-inspire, especially si June Mar (Fajardo).”

Duterte on PH court win over China: ‘That’s just paper; I’ll throw that in the wastebasket’

Only President Duterte can curse – Roque