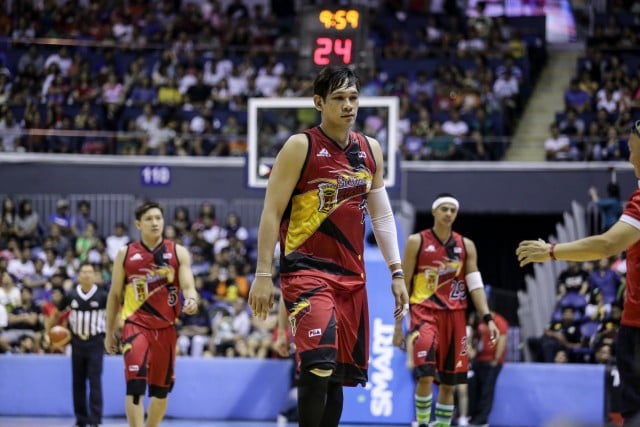 San Miguel has only lost by double-digits twice so far this season.

The first was a 99-84 loss to Rain or Shine last conference and the other was a 110-84 blowout dealt by Ginebra on Sunday.

The 26-point setback was the Beermen’s worst loss under head coach Leo Austria.

But the multi-titled mentor didn’t want to dwell on it too much. In fact, he sees the loss in a different light.

“I know that games like this will happen from time to time. Good thing we’re still in a position to go number one,” Austria said. “It could be a blessing in disguise for us.”

“A loss like this will really make the players think of what happened.”

It was the perfect case of unfortunate events for the Beermen as MVPs June Mar Fajardo and Arwind Santos were not at their best physically and emotionally.

Fajardo is still nursing an injury while a bereaved Santos failed to get going as both struggled mightily in their return.

Austria said he had to give Santos some minutes since he saw the 2013 MVP really wants to help his team.

“He wants to win, he wants to play,” Austria said. “He’s not yet 100 percent but I have to give him minutes. I need him for future games.”

In Fajardo’s case, Austria knows the problematic knee has slowed the two-time MVP.

“June Mar, it’s obvious he’s not yet at 100 percent and I have to give him a game or two and he’ll be back in his usual form.”