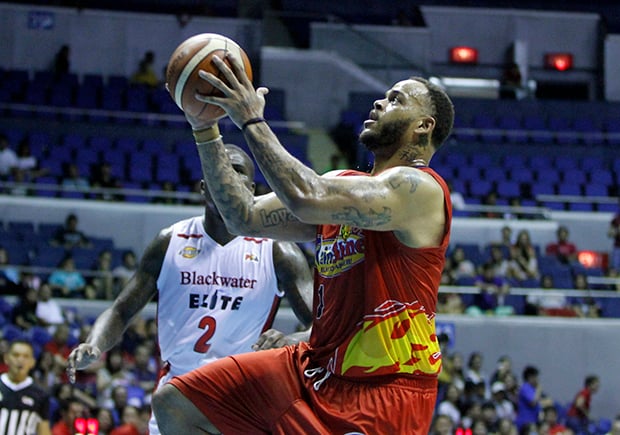 Pierre Henderson-Niles recalled the time when he and the late Bobby Parks shared a conversation about the PBA.

“He told me about the league five or six years ago, before he passed away, that I need to try to get over here,” recounted the 28-year-old big man.

Fast forward to Sunday and he joins the list of former Memphis Tigers players who is seeing action in the league.

Jet-lagged and all, Henderson-Niles did all he could to help Rain or Shine get a 118-107 victory over Blackwater.

Henderson-Niles just arrived early Saturday with only a short practice under his belt but that didn’t prevent him from contributing as he tried his best and accounted for 12 points, six rebounds, and a block in his PBA debut.

“My first game was a good game,” Henderson-Niles, who replaced Mo Charlo, assessed. “I could’ve done a bit more because of the jet lag. I was a little bit tired and I just tried to fight and get over it.”

Though he himself was not happy, coach Yeng Guiao is willing to give him more leeway as he sees a lot of potential in his fourth import this conference.

“The potential is there and his upside is good,” he said.

“We have a week or so to get him into game shape and jell with the team, but he’s a solid player. I like his post presence inside. He’s quick for his size, he’s deceptive and he’s not that slow. We want an import who can run with us because running game is still our game. We just need him to run and keep pace with us for six or seven minutes before we rest him. With him, we have a match against the other bigger imports.”

And Henderson-Niles hopes to pay that trust forward.

“Coach just told me to play my game, play defense, rebound, and have fun. I already knew coming in that I will provide the low post presence,” he said, as he hopes to make a good impression just like his former teammates Rob Dozier of Alaska and Shawn Taggart of GlobalPort.

“Hopefully, I’ll play well here, get us far, get back next season, and keep on going,” Henderson-Niles said.