Simon recalls Powerade upset, hopes Star can do the same vs SMB 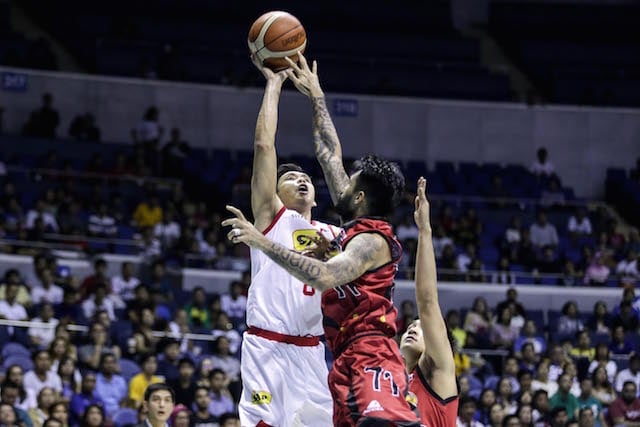 Without James Yap, Peter June Simon is playing a much bigger role for Star.

And on Monday, Simon proved he still has it.

Playing for almost 30 minutes, North Cotabato native shone for coach Jason Webb, leading the Hotshots to a 108-99 victory over top seed San Miguel in Game 1 of their best-of-three quarterfinals series.

Simon racked up 22 points on 7-of-13 shooting from the field, to go with four rebounds.

And now, the prospects of an upset is in play, as the eight-seed Star forced a do-or-die affair against the Beermen on Wednesday.

The Hotshots know what it feels like being booted out as the top seed after they were eliminated by a Gary David-led Powerade Tigers back in the 2012 Philippine Cup quarterfinals.

Simon hopes the Hotshots will be the one pulling off the upset this time.

But he knows that it’s not an easy task to win two games from San Miguel, and Simon is optimistic that Webb’s gameplan will once again be followed to a tee on Game 2.

Those allowed key guys to step up, especially Ricardo Ratliffe, who tallied 33 points and 29 rebounds, and Allein Maliksi, who went 5-of-12 from threes to wound up with 23 markers.

Simon said the Hotshots are just grateful for another opportunity to make it to the semifinals.