Cone on Ginebra exit: ‘We didn’t live up to the never say die legacy’ 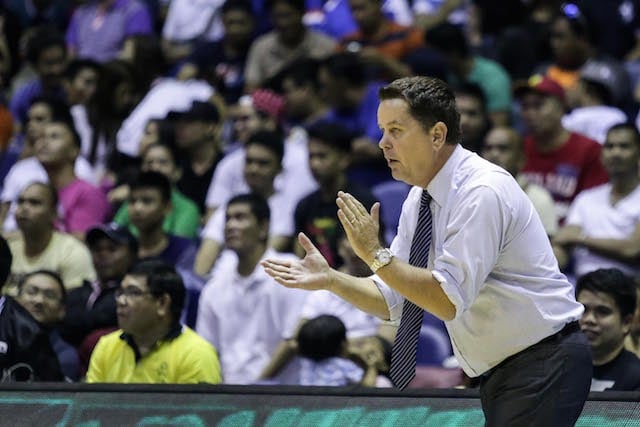 Though it was a tough pill to swallow, Tim Cone admitted Yeng Guiao got the better of him when Barangay Ginebra got booted out by Rain or Shine in the 2016 Oppo PBA Commissioner’s Cup quarterfinals.

“I’ve had some real battles with Coach Yeng and Rain or Shine over the years. Today, he certainly won this round and got the better of us. They were great and we were not,” he said in a text message moments after the Gin Kings’ 102-89 defeat to the Elasto Painters.

Ginebra just couldn’t get its gears going in Game 2 as it fell behind early and failed to recover in the endgame.

“It was the wrong time, obviously, to have an off-night,” said Cone, as his squad shot 39 percent from the field and a woeful 3-of-17 clip from threes. “But that’s the next level for us, learning how to collectively play big games and big moments.”

But what hurts the most for Cone is not being able to deliver for the fans.

“The game was an incredibly painful lesson for all of us, me especially. I hate disappointing the Ginebra fans,” he said.

“We didn’t live up to the never-say-die legacy,” Cone added. “I still feel in the near future that we’ll make them proud, but until then, we need keep proving that we deserve the Ginebra fan’s support.”