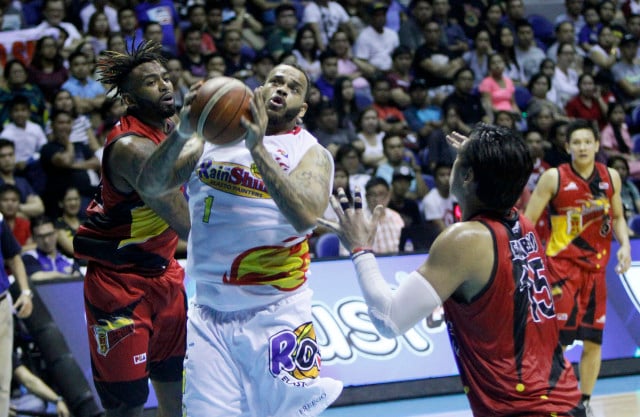 Pierre Henderson-Niles got the matchup he wanted when he faced off against June Mar Fajardo in Game 1 of the semifinals between Rain or Shine and San Miguel on Sunday.

The Elasto Painters import guaranteed to cancel out the Beermen’s two-time MVP the way he neutralized Ginebra’s 7-foot center Greg Slaughter in the quarterfinals less than a week ago.

“He was soft,” he said of Slaughter on the eve of his duel with Fajardo.

But Henderson-Niles soon found out Fajardo and Slaughter are not cut from the same cloth.

Fajardo did an admirable job against the former Memphis Tiger, posting 23 points and 13 rebounds.

But Henderson-Niles believes he could have performed better if not for him being saddled with foul trouble.

“If I wasn’t in foul trouble, it would have been a way better game on my end,” he said after posting 13 points and nine rebounds.

Despite Fajardo and Tyler Wilkerson getting their numbers, it was Rain or Shine which got the win in the end after it came back from an early 18-point deficit for a 98-94 win.

Henderson-Niles hopes to stay away from foul trouble for the remainder of the series and have a better chance at fulfilling his promise.

“I was kind of hard for me to play straight up, so I guess that was their game plan, getting me in foul trouble. They did and it worked, but in the second half, I got back in the game and just tried to redeem myself,” he said. “I just hope not to get into foul trouble, just play straight up next game. I know how to adjust, I know what to do next game. We’ll see how it’ll turn out.”

Game 2 is on Tuesday at Smart Araneta Coliseum.