Austria: Lassiter ‘was the missing link’ in Beermen’s Game 1 loss 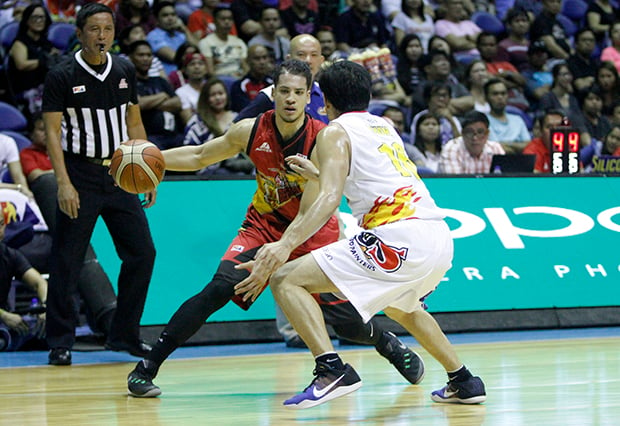 San Miguel head coach Leo Austria admitted the team missed the outside shooting of Marcio Lassiter as the Beermen faltered in the end and fell to Rain or Shine, 98-94, in Game 1 of their best-of-five semifinals series.

“He was the missing link,” Austria said. “I missed tonight yung outside shooting ni Marcio and yung kanyang defense.”

Struggling to find his rhythm anew for the second time in three games, Lassiter only had three points on 1-of-7 shooting from three.

Austria acknowledged that the defense contributed to Lassiter’s paltry shooting.

“Lahat ng tao niya, nakabantay sa kanya. I’m trying my best na bigyan siya ng kumpiyansa. He’s a marked man and I told him that it’s really hard for him to get an open shot.”

But the coach isn’t shy on calling out Lassiter on his woes.

“He took a lot of bad shots, but you cannot blame him. Ayokong tanggalin yung kumpiyansa niya but I have to point out na hindi lahat ng pagkakataon, you have the freedom to take the shot. We have to play according to game plan. The only way for him to get an open shot is to get the ball to the post and on a double-team, we have to make some extra passes. Yun ang hindi namin nakikita.”

“We have to play as a unit and trust is needed. Every possession is important. If we don’t have a clear layup or an open shot, we have to run other plays because we have to take advantage of our big man and import.”

Austria, however, is hopeful this would serve as a lesson for San Miguel in time for Game 2 on Tuesday.

“Hindi namin ginawa yung mga dapat naming gawin na alam naman namin. That’s why I told them we need a little bit of discipline and sense of urgency. Yun ang kailangan. There’s no big adjustment needed. We need to do our game plan both on offense and defense,” he said.