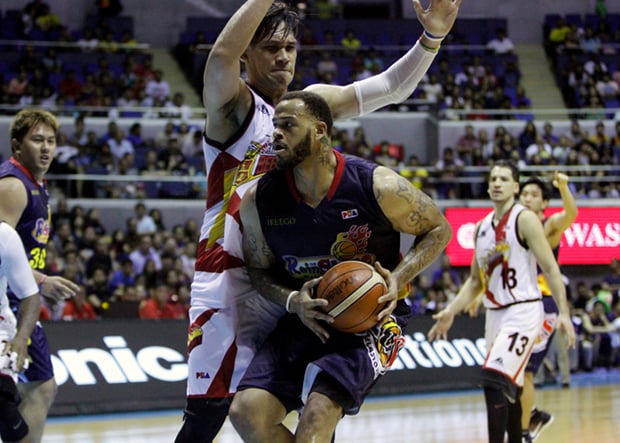 In Pierre Henderson-Niles’ mind, there’s nothing that can stop him from helping Rain or Shine snare the 2016 PBA Commissioner’s Cup title.

“I can’t be stopped,” he said. “Each game, I’m going to get better, getting in shape. Once I get in shape, nobody’s going to stop me in the post.”

And with the Elasto Painters formally in the championship round, the former Memphis Tiger is hellbent on taking the title for his team.

“I got two reasons for having an unfinished business. I didn’t win the (2008) NCAA tournament championship game, and my homeboy Wayne Chism played here last year and lost Game 7 in the Finals,” he said.

Henderson-Niles was part of the Derrick Rose-led Memphis team which lost to Kansas in the 2008 National Championship in overtime.

Chism, on the other hand, lost to Ivan Johnson and TNT in a Game 7 last Commissioner’s Cup. Chism was Rain or Shine’s import to start the conference but he went down with a major injury that forced the Elasto Painters to find a replacement.

“I want to win it for him too. Hopefully, we pull it out just for Wayne,” he said.

And the burly center has no doubt that the Elasto Painters have the tools to win it all.

“When I came in, they said we had a good team and they were in the Finals last year. As time kept going on and we kept playing different teams, I knew we got a good team. Every game, it was somebody different who stepped up. And this is what we came to be, in the Finals.”

“We’re doing good,” he added. “Everything we’ve been doing is happening in the defensive end. We turn it to offense, making shots. Defense wins championships, and I tell the guys that every night. If we play defense, we’ll win everything.”

Henderson-Niles could only care less whether it’s Meralco or Alaska which will join Rain or Shine in the last dance.