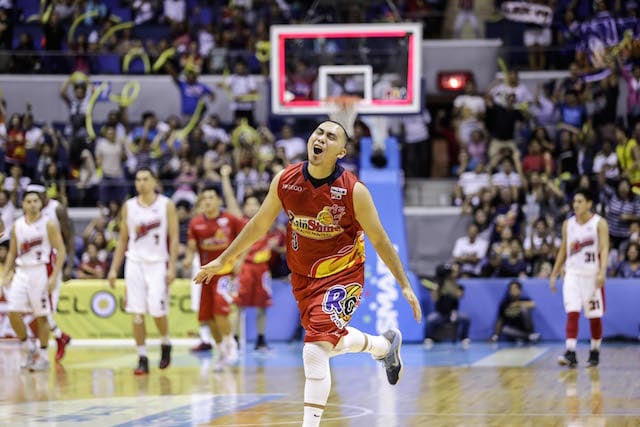 Rain or Shine’s Paul Lee celebrates after knocking down the buzzer-beating jumper to lift the Elasto Painters over the Alaska Aces in Game 2 of the 2016 PBA Commissioner’s Cup Finals on Sunday, May 8, 2016, at Smart Araneta Coliseum. Tristan Tamayo/INQUIRER

Paul Lee could’ve been anywhere on the floor in the waning seconds of Game 2 of the 2016 Commissioner’s Cup Finals on Sunday.

But as his Rain or Shine teammate Beau Belga fired a triple from the left corner and missed, Lee was all alone under the basket watching where the ball might end up.

The ball hit the right part of the iron — and fortunately for Lee — he was at the right place, just a couple of steps away where the ball bounced, at the right time, with exactly two seconds left when he secured the game’s final possession enough time to gather himself and make the fallaway jumper.

“The play was for Jericho (Cruz) to choose to go either left or right. We put two shooters at the corner supposed to be si Jeff (Chan) at si Paul. Inagaw ni Beau yung isang corner. Hindi naman siya dapat yung shooter, feeling shooter,” said ROS head coach Yeng Guiao with a grin. “Anyway, it wasn’t the play, but it turned out to be the winning play for us.”

The 27-year-old Lee also played hero in Rain or Shine’s 105-97 victory in Game 1 last Friday and since his return from a left knee injury, he has returned to starring in his old role as his team’s go-to guy.

“Paul again, [is] back to his old form just like in Game 1. He’s just back to his leadership role in this team,” Guiao said of his star guard.

Lee’s resurgence is the result of his relentless pursuit to get back into his old position as one of the top players in the league.

A testament to that is his improved numbers starting in the semifinals series against San Miguel Beer where Guiao decided it was time to give Lee his usual minutes.

Lee is averaging 18.5 points per game through two games in the Finals, but what’s more impressive is the pounds he has been able to shed off in just two months.