Painters go for crown vs Aces in Game 5 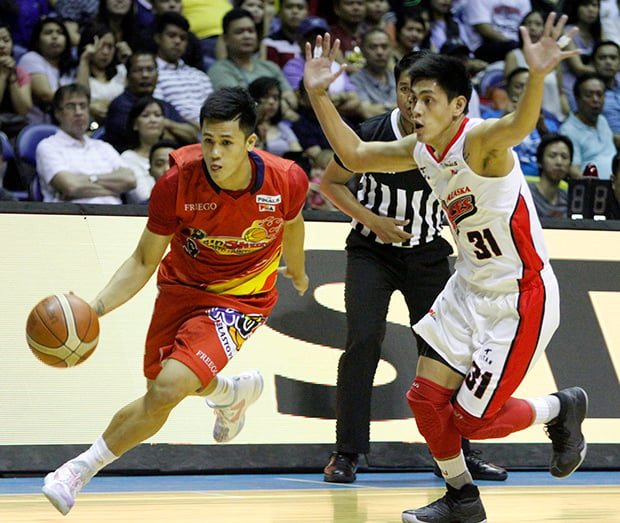 Hardly shaken by their Game 4 defeat, the Rain or Shine Elasto Painters vow to come back in their Sunday best, looking to deliver the Sunday punch on the Alaska Milk Aces in Game 5 of the Oppo PBA Commissioner’s Cup Finals.

Their marching order as they set out for the match set at 5 p.m. Sunday? No more further delay in wrapping up the crown.

For coach Yeng Guiao, their 99-111 loss Friday night was merely postponement of their date with destiny.

Somehow, it’s a costly one for Guiao and his wife Jenny as they failed to leave the country Saturday to catch the graduation of their eldest kid who finisher her master’s degree at the prestigious Cambridge University in London.

Nonetheless, Guiao wants to dispose of the Aces the soonest they can so that they can catch up with their children for a family celebration in the British capital.

Needless to say, the Guiaos also want to celebrate a Rain or Shine championship.
“The championship is postponed for now, but it’s well on its way,” said Guiao.

“We still feel we will win this championship, not just on a Friday the 13th, but maybe on a Sunday the 15th. It’s a better day,” Guiao also said.

A scrambling finish in Game Three that spilled over to Game Four had the E-Painters blowing away what could have been a sweet sweep.

The Aces tore apart the sweep script with a gritty performance leading to a dominant, wire-to-wire 111-99 victory Friday.

“How I wish we played this way earlier in the series,” said Alaska coach Alex Compton.

“I have to commend our players. We challenged them, and they responded. We showed up,” Compton also said.

But for how long can they delay their final rites?

The E-Painters promise to make their own fightback in Game Five.