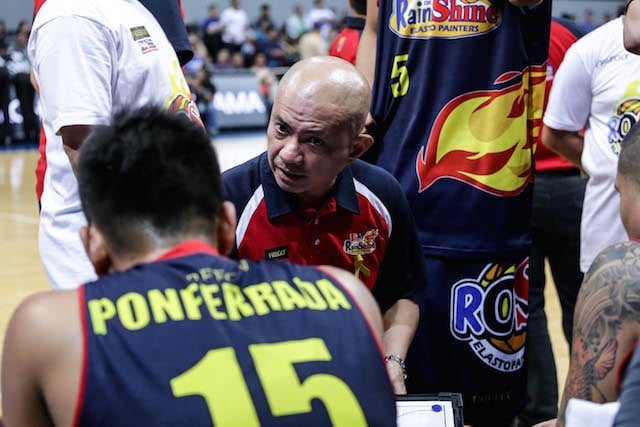 Last Wednesday, Rain or Shine head coach Yeng Guiao refused to guarantee a victory even after his Elasto Painters had taken a comfortable 3-0 lead in their 2016 PBA Commissioner’s Cup Finals duel with the Alaska Aces.

But just when the Aces have won two in a row to make the series interesting, Guiao couldn’t help himself from making a subtle declaration.

“I’m still very positive we will win this championship. I will not dare make any more predictions, except that in the end, we will win this one,” Guiao said following the Painters’ 86-78 loss in Game 5 Sunday night.

Despite his confidence, Guiao is wary of the Aces, who have been on a resurgence since losing the first three games of the series.

“Ang attitude ko naman rito, you have to claim it at this point. Itong championship na ito, if you do not make that mental resolve, you can easily lose the momentum,” he said. “Sabi ko nga sa mga players, Alaska now has the momentum, but it doesn’t mean they can run over us and totally take over that momentum.”

Game 6 is on Wednesday night, still at Smart Araneta Coliseum.

Read Next
Belga puts ROS loss on himself: ‘Too much stupidity’
EDITORS' PICK
Taal Volcano flexes signs of restiveness anew
Get exciting deals and discounts when you download the new McDonald’s App
China expands lockdowns to 25M people to halt viral outbreak
SM continues to send relief assistance to remote towns in Batangas
Beyond water service: Maynilad builds massive infrastructure projects to clean up Metro Manila waterways
BIR grants relief to Taal-affected taxpayers in Batangas
MOST READ
Taal Volcano flexes signs of restiveness anew
Lacson on Duterte’s threat to end VFA over Bato’s canceled visa: Where is the connection?
Part of Aurora Boulevard in Cubao closed from Jan. 25 – Feb. 1
Lacson presses SC to rule on international agreements like VFA
Don't miss out on the latest news and information.