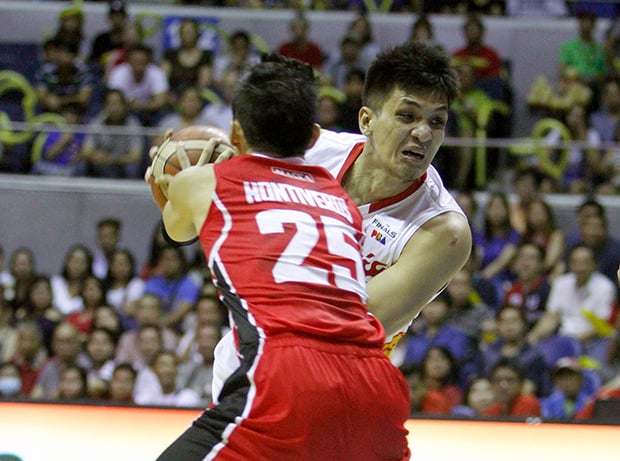 Alaska’s vaunted defense is back and one of its best offensive players can attest to that.

Veteran swingman Dondon Hontiveros said to play good defense has always been the Aces’ priority. It didn’t show in the first three games of the Finals especially in Game 3 but it certainly did in Games 4 and 5.

In Alaska’s three losses in the series, Rain or Shine eclipsed the century mark as it averaged 107.3 points per game.

But the past couple of games have been different with the Aces able to hold the Elasto Painters below 100 points.

“We have other guys who can score, like Calvin (Abueva), Rob (Dozier), Chris (Banchero).”

Calvin Abueva finished with 20 points, 10 in the fourth, while Dozier had 14. For his part, Hontiveros finished with 12 points, nine from three-point area.

With its defense present, Hontiveros said the offense followed.

“It was our offense that really dictated the game, and it was the first time na parang we were dictating the game,” said Hontiveros.

The Painters had been shooting the lights out from the outside in the series but Game 5 saw them hit only six out of their 30 attempts thanks to the Aces’ defense.

“We extended the series, we live another day, continue to grow, and pakita namin na kaya naming makisabay.”