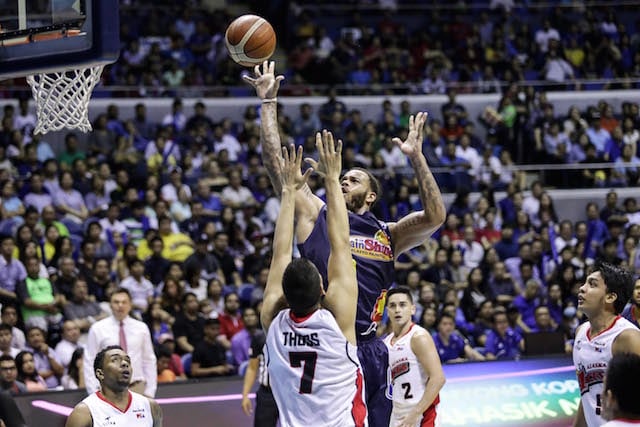 He may not score a lot, but for Rain or Shine’s Pierre Henderson-Niles, he was the import celebrating a championship when the final buzzer sounded on Wednesday night.

The lowest scoring PBA import won a title and it’s something that can’t be taken away from him.

“I’m scoring that much and getting rebounds and we won a championship. Numbers don’t really care, even the Best Import. This is what I came here for, the championship.”

Henderson-Niles fought through the criticisms and did all he could to help Rain or Shine clinch the 2016 PBA Commissioner’s Cup crown.

And in that pivotal Game 6 against a resurgent Alaska side, the hefty reinforcement chalked in seven points and nine rebounds, doing just enough to contribute and support the Elasto Painters’ locals.

“The satisfying thing about this championship is we won a championship with the lowest scoring import ever in the league,” said ROS head coach Yeng Guiao, whose squad won the title despite fielding in four different imports.

“It’s something different, something unique. Di ito kamukha nung stereotype na import na iiskor ng 30 points and the whole play revolves around him. It wasn’t that way with P, but he gave us what we needed. Sabi ko nga, the proof of the pudding is in the eating. 10-3 yung record niya mula nung dumating siya sa amin. It’s a great record anywhere, including the championship, and how can you argue with that?”

Henderson-Niles admitted closing the series wasn’t an easy one.

“It was tough. I really felt we should have closed it out on Game 4. Alaska is a tough team, they won’t go down without a fight.”

His triumph had to be at the expense of Rob Dozier, his college teammate at Memphis. But Henderson-Niles made it clear that the bond between the two of them eclipses any championship and defeat.

“We talk every day. I’ll see him when I get home. We’re real brothers. It’s beyond basketball. It’s either going to be him or be me, and today, it’s me,” he said.

And Henderson-Niles hopes to replicate the sweet feeling of his first ever professional championship, if he gets a return trip next year.

“It feels good. Hopefully, we could repeat next year if they bring me back,” he said. “I’ll be in much better shape, believe that. Next season, I’ll be in great shape. Trust me.”