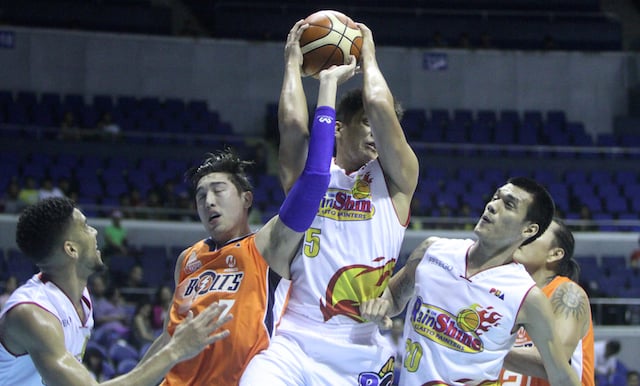 – Meralco played Ginebra tough in their last game, but the Bolts just weren’t able to shoot well enough to prevail. Despite having 14 more FG attempts, Meralco couldn’t make the most out of it, making just 45% of their shots. In contrast, Ginebra hit nearly 60% of their own attempts. For sure, Meralco needs to do a much better job on defense to have a chance against ROS.

– As for the Painters, they did a pretty good job keeping the Elite at bay in their last game. Jeff Chan and Dior Lowhorn each scored 20 points, and both will play big roles in this one as well, but other guys like Raymond Almazan, Gabe Norwood, and Maverick Ahanmisi have to step up as well. As long as coach Yeng Guiao’s wards don’t go ice cold or have a meltdown, they should be in good shape.

– These teams have also split their first two games this season, so this game will be sort of a rubber match to see who gets the upper-hand in their head-to-head. Dahil dito, tiyak na uulan, kukulog, at kikidlat sa labang ito!

– Cliff Hodge was a man possessed for Meralco in their game against Ginebra. The 6-foot-6 Fil-American topscored for the Bolts with 19 points on top of 7 rebounds and 3 steals. His has always been a crucial barometer for Meralco, and that will continue to apply here as they face a big and burly ROS team.

– Allen Durham struggled with his shooting against Ginebra, but he compensated by ruling the boards, handing out a ton of assists, and playing well on D. It’s clear that Durham can affect a game on both ends of the floor, but he’ll need to rediscover his sharp form for the Bolts to spring an upset here.

3. MERALCO: IMPOSE ON THE INSIDE

– One thing Meralco did well in their previous game is imposing their will in the paint. Meralco outscored the bigger Ginebra squad big time in that game, and if the Bolts can continue to dominate in the box, the Painters maybe in a bit of trouble.

– Dior Lowhorn’s nifty double-double was big in ROS’s win over Blackwater. His size can really make things difficult for ROS’s foes, and if he continues to adjust well to the Painters’ style, he should be even more productive and dominant moving forward.

– Veteran Painters like Chris Tiu, Gabe Norwood, and Beau Belga have always been reliable, but their production in their previous outing left much to be desired. Sure, ROS, has a lot of weapons in its roster, but having their veterans step up their production would certainly boost their chances of coming up with a win.

– Jamshidi came in as highly touted Asian imports, but he hasn’t really been able to dominate yet. He has had his shining moments, but I’m sure the Iranian swingman would like to have a true breakout game. On the other end, Norwood is a guy who has battled Jamshidi in the past, and playing opposite the Iranian star may just bring out the best from the Fil-American.