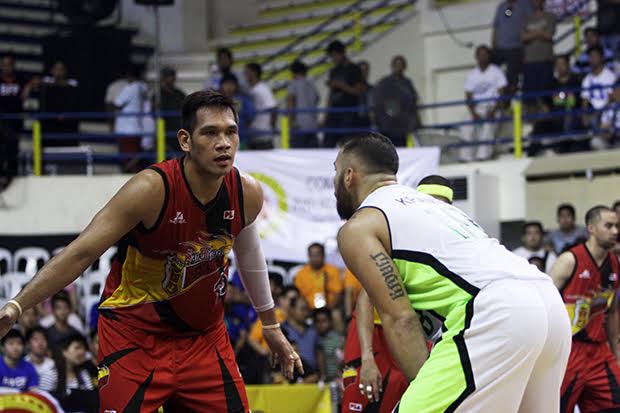 Both GLO & SMB are entering this game straight off separate wins, but only one of them will come out victorious. Will it be the team near the top, or the team dwelling very near the bottom?

GLO has had a terrible start this conference,but they got a semblance of positivity after winning against MER in OT. They still have a long way to go to even have a shot at making the next round, but a win over no less than SMB here should prop up their spirits and their odds even more.

SMB, meanwhile, has been nearly unbeatable, winning 4 of their 5 contests so far. Their last two were against sister teams STA and GIN, and those should give the Beermen a lot of confidence against GLO today. Of course, they will look to old reliables like AZ Reid, JMF, and Alex Cabagnot to carry much of the load against a dangerous Batang Pier squad.

GLO has been winless against SMB so far this season, losing both in the PHL Cup and COMM Cup. The Batang Pier, after getting win #1 this conference, are certainly looking to break the dry spell against SMB here.

1. FITS LIKE A GLOVER
– Import Mike Glover hasn’t had an off day yet for GLO, and that’s a good sign as they battle the deep SMB here. The 6’7 NYC native has been a bruising physical specimen for GLO, and they’ll need every ounce of his strength to counter a bigger, deeper Beermen quintet.

2. THE THIRD SPLASH BRO?
– Stanley Pringle and Terrence Romeo are collectively known as the local version of the Splash Bros, but have we found the third one in Anthony Semerad? Semerad made a good case of it when he dropped a career-high 24 points in GLO’s last win. He nailed 6 triples en route to that point total. If he can even just approximate that kind of production here, it will give GLO a huge boost.

3. GLO: ASAN ANG DEPENSA?!
– GLO can outshoot its foes, but can they defend? They have been a big disappointment in that department this conference as they rank dead last in points allowed and near the bottom in FG% allowed. They also get outrebounded by an average of almost 5 boards per game. The Batang Pier have to find a way to rectify that lest they notch another mark on the loss column today.

4. REID AND REACT
– AZ Reid continued to prove his worth in SMB’s win over GIN. Reid put up a sublime double-double line for the Beermen, and though opposing import Justin Brownlee still had better numbers, Reid’s heavy contributions were the ones that resulted in a W for his team. Reid knows he doesn’t have to dominate for SMB to win because the Beermen are just so stacked with talent.

5. THE CONQUERING KRAKEN
– The Kraken JMF continued his strong play this conference by putting up 17 points and as many rebounds against sister team GIN. After a somewhat lackluster 2nd conference, where his production dipped, it sure looks like the June Mar we all know and love is fully back in the fold. That can only mean good things for SMB, which is looking to keep abreast of TNT, which sits pretty at 1st place.

6. SMB: LONG RANGE, NO SWEAT
– SMB is strong inside with JMF, but one weapon they’ve enjoyed this conference is terrific outside shooting. SMB leads the league right now with nearly 12 triples per game, and that kind of perimeter game opens things up even more for JMF in the paint and just gives opposing teams a lot to think about on defense.

7. KEY MATCH-UP: TERRENCE ROMEO X MARCIO LASSITER
– Romeo and Lassiter are two of the best shooters in the league and two of the most electrifying performers, too. Whereas Romeo likes to break his man down with his ball-handling and ability to pull up in traffic, Lassiter likes to catch & shoot as well as find the seams in the defense. It’s a great contrast of styles that’s sure to make this game more exciting, and this match up will surely have a big imprint on the outcome of this encounter.