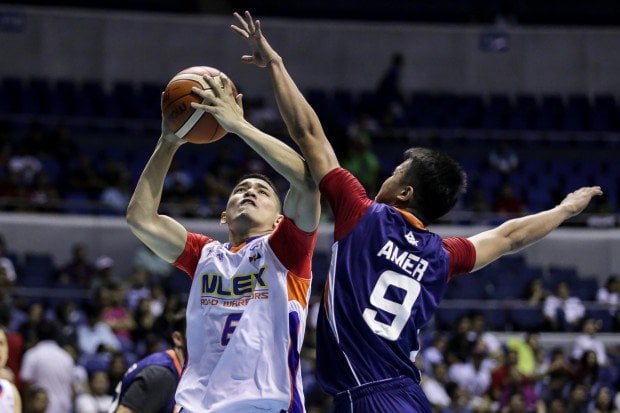 NLX and MER are sister teams, but with both of them mired in the middle of the team standings, they cannot afford to give way in this match up. Walang hating kapatid dito, lalo na’t gusto ng parehong koponang maka-angat at makapasok sa quarterfinals. A win here will enable MER to remain in the top five, while a win for NLX will make them leapfrog the Bolts and put them in a position to possibly finish in the top four.

NLX started the conference badly, losing three of their first four games, but they’ve since won back-to-back against STA and MAH. They have a ton of momentum heading into this contest, but it won’t be easy upending the Bolts, who are also coming off a victory. Henry Walker waxed hot in NLX’s last win and Kevin Alas also did well, but they’ll certainly need a lot more from their other players if they want to beat MER.

Speaking of MER, they’ve won two of their last three games and lost to GLO by only 3 point sin OT. The Bolts are playing at a high level right now, which is why they’re among the top five. Allen Durham has been a godsend for MER, giving the Bolts a solid inside presence, and guys like Jared Dillinger, Cliff Hodge, and Bryan Faundo have also done well of late. If the Bolts continue to draw balanced production from their roster, they’ll be tough to beat in this game.

NLX has actually won most of their head-to-head games against MER this season, but MER inflicted a critical defeat on NLX in the quarterfinals of the previous conference. NLX will surely want some payback here agains the team that ousted them in the COMM Cup.

1. WINDWALKER
– Henry Walker has been great for NLX, leading them in scoring, rebounding, and 3pt shooting. Without a doubt, he’ll need to continue playing at a really high level for the Road Warriors to have a good shot of winning here. He’s the guy who will really carry this team this conference.

2. KEVIN COMES THROUGH
– Kevin Alas provided ample support to Walker in NLX’s win over MER, scoring 13 points on 6/9 shooting. That’s the kind of production needed from the likes of Alas and the other key locals of the Road Warriors. If Alas comes through again in this contest, that’ll be a very good sign for NLX.

3. NLX: MAKING ‘EM PAY
– The Road Warriors made the Enforcer pay for their turnovers in the last game. NLX forced MAH to commit 20 turnovers, and the Road Warriors promptly scored 20 points off these mistakes. It will be tough to do that against a more disciplined MER squad, but if NLX can pull it off, they will be in great shape to win. This is one big reason NLX is the top defensive team in the league right now, allowing just 89.3ppg.

4. IN AWE OF ALLEN
– Allen Durham has been nothing short of awesome for MER. After dropping 55 on GLO, he put up another strong showing against BLA, and if that’s any indication, he’ll probably do really well again here against NLX. He will be a really tough match up in the paint for the Road Warriors, and if he dominates in the middle, MER should have little trouble getting the W.

5. DILLINGER DELIVERS
– Jared Dillinger bombed out in MER’s loss to GLO, but he recovered really well against BLA, putting up 16 points off the bench. His veteran presence, size, and talent make him a very impactful player for MER, so the Bolts will probably rely on him again to contribute heavily here against NLX.

6. MER: BATTLING ON THE BOARDS
– One reason MER was able to soundly beat BLA in their previous game was because they ruled the battle of the boards. The Bolts were +20 on the glass, and that helped them get +13 second chance points, too. Five Bolts grabbed 5 or more rebounds in that match, and if the Bolts are allowed to rule the rebounding battle again, they’ll be extremely difficult to defeat.

7. KEY MATCH-UP: JONAS VILLANUEVA X JIMMY ALAPAG
– Jonas Villanueva has been NLX’s 2nd best player this conference, and he is expected to play a major role here again. Alapag, meanwhile, despite his age, has been the Bolts’ best PG, and it’ll be interesting to see how he can match up with Villanueva, who is the only Road Warrior averaging double-digit scoring aside from Walker. If Alapag can hamper Villanueva’s production, all the more MER should be favored to win here.