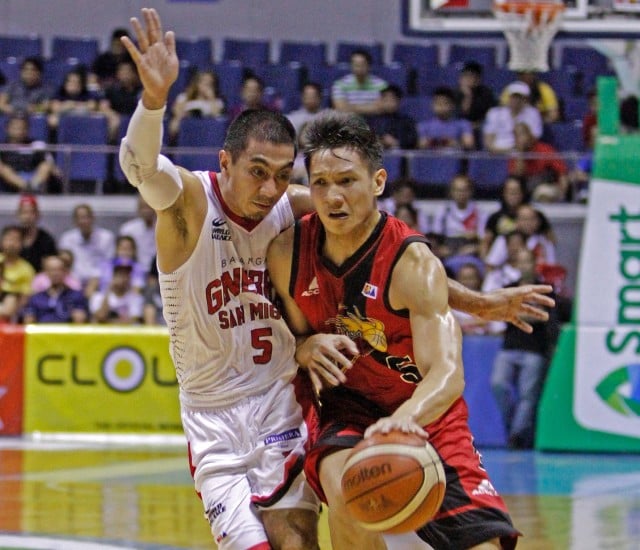 “Mukha ba akong concerned?” Tenorio said smiling. “Hindi naman ako concerned. It’s not about me, it’s not about our import. it’s about the team.”

Following his 32-point performance in Ginebra’s quarterfinal tiff against Alaska, Tenorio went 0-of-9 from the field in Game 1 of the best-of-5 semifinals series against San Miguel.

But despite his offensive struggles, the Gin Kings gutted out a 115-108 victory to draw first blood.

“The most important thing for me na sinasabi ni coach Tim (Cone) sa akin is I can still dominate the game while not scoring. May mga nagagawa ako even though I’m not scoring,” he said. “Yun ang na-instill sa amin na philosophy ni coach Tim, to make everybody part of the game.”

And Tenorio hopes this great run will be sustained in the coming games as Ginebra eyes a spot in the 2016 PBA Governors’ Cup Finals.

“Looking now, maganda ang tinatakbo ng team. For the past two games, it was Mark (Caguioa) who was not scoring, pero may nagagawa sya na ibang bagay, and yun yung ginagawa namin. Kanina, I know I’m struggling at na-feel ko na so I did something else aside from scoring which is lead the team, make sure the team is ok inside the court, yung small things na pwede kong matulong for us to win. It doesn’t matter about the scoring.”

With Ginebra focused on Wednesday’s Game 2, Tenorio said he wouldn’t change a thing as long as the team comes away with the win.

‘I will always speak up for you’: Server on defending Fil-Am family from racist rant