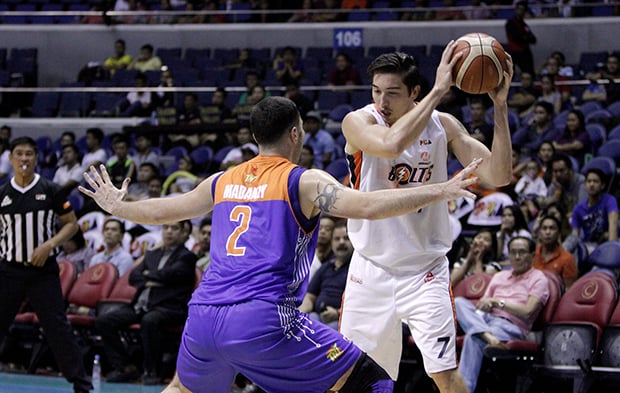 Hours before tipoff, Cliff Hodge already had an idea of what kind of game he was going to have.

He just didn’t know he was going to have the game of his life.

And what a time for the Meralco forward to have the best game of his career with the Bolts playing the most important game of their young franchise.

Known for his hustle and defense, Hodge showed the other side of his game as he unleashed 32 points on 12-of-19 shooting from the field to push Meralco into its first ever finals appearance with a gutsy 94-88 win over top seed TNT in Game 4 of their semifinals duel Monday night.

“In my whole career, high school, college, this is probably my best game ever,” said Hodge. “I mean, you gotta shoot to make it, so I said i’m gonna let it fly.”

“What a game by Cliff Hodge. That was unbelievable,” Meralco head coach Norman Black marveled. “He picked tonight to have a career game, and we needed every single bit of his energy, we needed every single bit of his production, and that just goes to show that he’s really grown as a player and hopefully, he’ll start to get some recognition for that as we go forward.”

Hodge capped off his sterling performance with a clutch 3-pointer with under a minute left.

“Before the game, I was getting a lot of 3s up and my shot felt really good, so I knew it was gonna be a good game,” Hodge recalled. “I just had to stay composed, stay calm and knock them down.”

Hodge said his hunger drove him to be at his best and the absence of his veteran teammate Jared Dillinger pushed him to have the kind of game he needed to provide to fill the hole.

“It’s been four years. I know that last conference we had a chance to get there,” said Hodge, referring to the Bolts’ heartbreaking semifinals exit at hands of the Alaska Aces in the Commissioner’s Cup. “I was just super hungry, and i knew that with JD down, someone had to step up, and i just tried to step up as much as possible.”

“For me it’s about being the best player for my team and helping these guys out, and trying to win as many games as possible. I’m still kind of speechless with what happened tonight, it’s amazing. “