Miranda proves he still has it, hits game winner for Elite 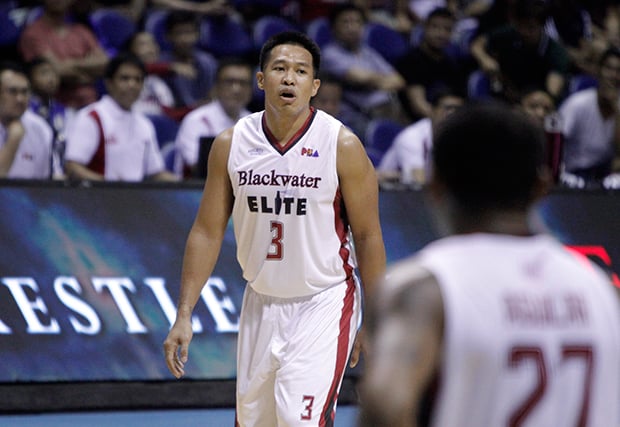 When everyone was looking at Mac Belo to bail Blackwater out, another Tamaraw stepped up to the plate and drilled the dagger.

Denok Miranda hit the biggest shot of the night, draining the game-winning basket on a tough drive for an 86-84 win by the Elite over the Meralco Bolts on Sunday.

“I still have it,” said Miranda as his bucket kept Blackwater unscathed after two outings.

For his coach Leo Isaac, he’s just happy to see his veteran guard take charge in the end.

“The last shot could have been for anybody, but the veteran rose up to the occasion and took on the challenge,” he said.

But the 34-year-old Miranda shared it wasn’t the plan, with Isaac telling his wards to just attack the defense knowing that Meralco still had a foul to give.

“Coach only told us to attack. It was either me or Mac (Belo) who will give the ball screen, but when I got the ball, I saw the clock and had a good spacing so I went to the baseline. I felt the foul and I threw the ball. I’m just thankful to God,” he said.

Entrusted to provide veteran presence and leadership for a young Blackwater team, Miranda was happy to note that slowly, he’s seeing the culture change the management badly wanted.

“The bosses talked to me and wanted to build a good culture knowing that we have a virtually new team,” he said.

“My 12 years of experience comes in handy as I share my knowledge to them. I also give them pointers – Mac (Belo), Art (dela Cruz), almost all of them. That’s my role to this team.”

It also helps that the Elite have players who have been playing in big moments before.

Miranda, Belo, and Reil Cervantes were all products of championship-contending Far Eastern University teams, while Art dela Cruz and Kyle Pascual were part of the San Beda dynasty teams before making it to the pros.

And if it’s any indication, Blackwater’s 2-0 record is a step to the right direction.

“Our focus is for every practice and every game to be at a high level. We have good intensity and good ball movement, and we also have players who are interchangeable in their positions. That’s what makes this team unique,” he said.