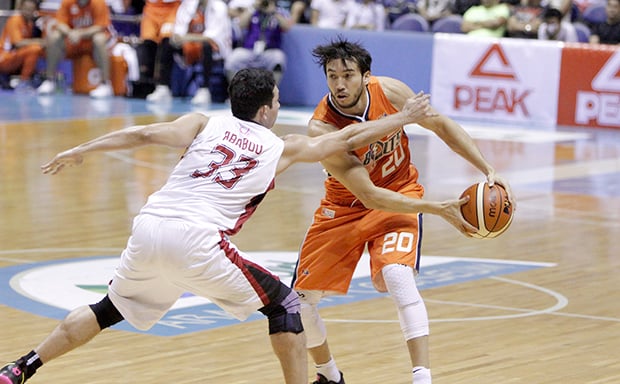 Jared Dillinger was still far from his old form when he made his return from injury on Sunday.

The Meralco swingman played just nine minutes in the Bolts’ 86-84 loss to the Blackwater Elite in the 2017 PBA Philippine Cup.

The 32-year-old, a major piece in the Bolts’ rotation, is coming off a hamstring injury he sustained in Game 2 of their 2016 PBA Governors’ Cup semifinal showdown against TNT that kept him out for the rest of the series and best-of-seven Finals duel with Barangay Ginebra.

Dillinger took only one attempt, grabbed three rebounds and committed two turnovers in his short stint, nowhere close from the form that helped the Bolts to make a deep run last conference.

“I haven’t played in two months, I just started to practice maybe three days ago. Coach Norman just wanna pull me in a little bit. Just trying to run up and down. My legs aren’t there yet, I’m still feeling weak, so It’s gonna be a process,” Dillinger said.

And with ace point guard Jimmy Alapag officially retired, Dillinger urged his teammates to step up.

“It’s gonna take a little time to adjust with Jimmy(Alapag) no longer there anymore. I think we all have to collectively step up, some guys will need to step up. And we’re gonna  need to start growing  up as a team and try to do our part a little harder because we got some growing pains,” he said.

Dillinger remained upbeat despite in the absence of Alapag and vowed to get even better as the season goes on.

“ Looking at the bigger picture, we got new guys who could provide some energy in our rotation and make a difference. Justin Chua just got some playing time, Rabeh (Al-Hussaini) is picking up his game, we have two skilled rookies in Jonathan (Gray) and Ed (Daquioag) and there’s Joseph Yeo.

“It’s a growing process. There’s nowhere to go but up and we got a week to figure it out.” Dillinger said. Onofre John Andres