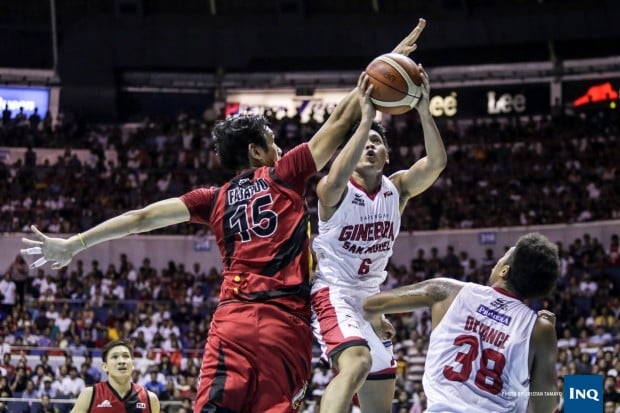 Unbeaten in their last five games and completely dominant in their last three outings, San Miguel Beer could finally be in for a hard grind versus Barangay Ginebra in a crucial setto to mark the return of the PBA Philippine Cup at Smart Araneta Coliseum Sunday.

Anticipating a tough test against the Kings, the Beermen have primed themselves up for the keenly awaited match with a 118-93 thrashing of the Blackwater Elite Friday over at Mall of Asia Arena in Pasay City.

San Miguel sealed a playoff entry on its win over Blackwater. The Beermen pursue their winning drive now in chase of a Top Two finish which rewards a twice-to-beat advantage in the quarterfinals.

Ginebra shares seventh place with Alaska and Star with their identical 3-3 win-loss slates.

Though two and a half games behind the Beermen, the Kings are upbeat on their chance against the Philippine Cup reigning champs, coming from a morale-boosting 86-79 triumph over the Star Hotshots on their Christmas Day showdown at the Philippine Arena in Bocaue, Bulacan.

Interestingly, the two teams split equally their last 22 matches dating back to 2011.

In their most record tiff, the Gin Kings clobbered the Beermen, 117-92, in the deciding game of their best-of-five semifinal series in the last Governors Cup.

But the Beermen have since got back on a romp, leading the pack in the current all-Filipino tourney – thanks to the consistent solid games of June Mar Fajardo, Alex Cabagnot, Arwind Santos, Marcio Lassiter and Chris Lutz.

The Kings, meanwhile, have been riding high on the superlative games of Japeth Aguilar.

Aguilar came out as a tremendous force, scoring from inside and out and rebounding on both boards in a career-best 32-point game that powered the Gin Kings past the Star Hotshots last Christmas.

The 6-foot-9 center went 10-of-15 overall from the field and 7-of-8 from the stripe in surpassing his previous career high of 29 made in his first season with Ginebra in the 2013-14 campaign.

The Fajardo-Aguilar match-up could well be among the focal points of the SMB-Ginebra tussle.