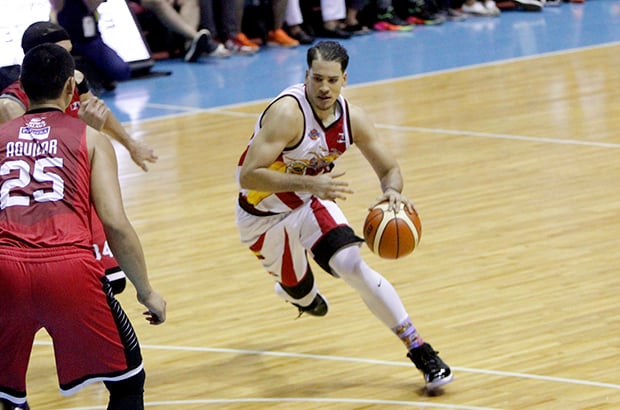 Marcio Lassiter almost took the brunt of the blame had San Miguel lost to Barangay Ginebra on Sunday.

Fouled with the Beermen holding a slim 72-70 lead, the marksman shockingly muffed two charities and gave the Gin Kings one last shot with 11 seconds left.

“I left it short. I can’t blame no one but myself,” he said.

Fortunately for him, the San Miguel defense was locked in, averting a 10-point collapse and holding on to the win in the end game as LA Tenorio flubbed his potential game-tying floater.

Lassiter exhaled a huge sigh at the buzzer as he avoided being the fall guy with the Beermen escaping with their sixth straight win after another off-shooting night from him.

“I guess when you’re not going, nothing’s going in. I think tonight’s one of my worst shooting nights,” he said after finishing the game with seven points after missing all of his six tries from three-point country.

Despite his struggles, Lassiter can sleep knowing he did all he could to help San Miguel, leading the squad in boards with 13 rebounds, while also dishing four assists.

“I helped in different areas. I was kind of thankful I did something like that,” he said.

Shooting a measly 31-percent from threes this conference may be demoralizing for a sharpshooter like Lassiter, but he said that these kinds of nights doesn’t really ruin his psyche, as he maintains that whatever the circumstance is, his approach remains the same.

“It’s just something I got to get over. I’m not too worried about that. I’m a shooter so I’ll keep shooting. It’s part of the game. It’s not always going to go in as much as you’d like it to go in but you can’t do nothing about that.”

With San Miguel sitting on top of the standings at 7-1, Lassiter isn’t really too worried on his supposed struggles, saying that he believes sooner or later, he will inevitably get his shooting touch back.

“I’m confident on my abilities, on what I do. I’m a very intelligent player so shooting is one of my facets of my game,” he said.

“The biggest thing is we won the game. I could’ve shot 100-percent and we may have lost, I would’ve felt worse. So I’m kind of happy I shot bad, that means I got to do better, be more dialed-in next time.”