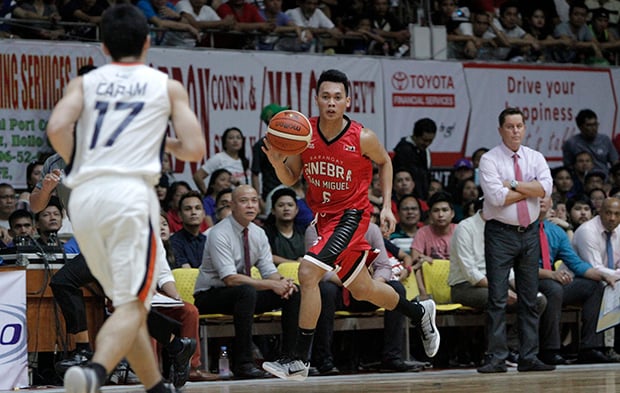 ILOILO CITY – Joe Devance achieved a personal milestone and the whole Barangay Ginebra team celebrated a crucial win over Meralco that got the team back in the thick of the fight for the playoffs in the PBA Philippine Cup at the University of San Agustin Gym here Saturday night.

Devance, Japeth Aguilar, Scottie Thompson and LA Tenorio all came through with productive performances as the Gin Kings repulsed the Bolts, 83-72, in an emotional Petron Blaze Saturday Special to move up to joint sixth place with the Blackwater Elite and the Phoenix Fuel Masters at 4-4.

The Bolts, meanwhile, practically kissed their quarters hopes goodbye with a sixth straight loss and seventh in all against only two wins.

Devance distinguished himself as only the ninth Ginebra player to hit the 5,000-point plateau and made the feat extra special in helping the Kings keep their supremacy over the Bolts.

Needing just nine points to achieve the feat, Devance made a game-high 19 that went with six rebounds and one assist against six turnovers.

He scored crucial buckets at the finish, helping the Kings through in the emotional and rugged match marred by a heated exchange of words between coaches Tim Cone and Norman Black in the first period.

Cone and the Meralco bench were both called a technical foul in the incident.

Aguilar also shone with a double-double game with 17 points and 12 rebounds, Thompson made an impact with 16 rebounds, seven points and the same number of assists while Tenorio also stepped up with 18 markers.

The four took turns to carry the load for the Kings as they overcame the Bolts’ tough stand.

Meralco held control most of the first half, but ran out of energy and firepower in the end, and thus fell deeper down the cellar with a sixth straight defeat, following earlier losses to Alaska, Phoenix, San Miguel Beer, GlobalPort and Mahindra.

The Bolts blew an early 10-point lead before erasing the Kings’ seven-point spread in taking a one-point lead at the half on Ed Daquiaog’s step-back three-pointer at the buzzer.

Earlier, Reynel Hugnatan, Chris Newsome, Cliff Hodge, Bryan Faundo and Baser Amer got Meralco to a good start, leading 23-14 at the end of the opening canto.

The Bolts were ahead when Cone and Black exchanged heated words following a hard foul by Hodge on Kevin Ferrer.