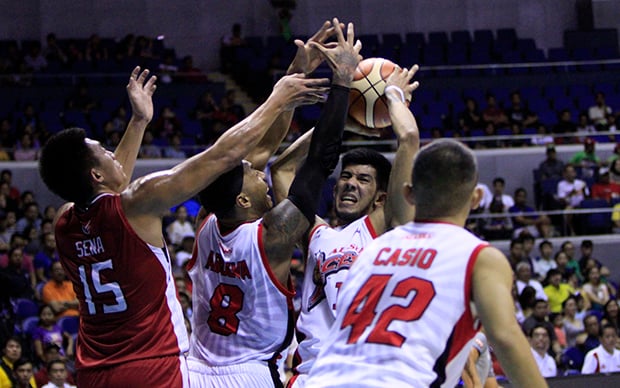 It wasn’t the best of Sundays for Alaska head coach Alex Compton.

He walked in the hallway of Smart Araneta Coliseum with his lovely wife and two young boys, but there was no cause for celebration after another sorry loss.

Alaska blew a chance, and it proved costly.

The Aces were on the verge of another improbable comeback against a young Blackwater team, but their rally came up short as they succumbed to a 103-100 loss.

The Aces are currently at 4-4 and a win could’ve sent them into second, but Compton knows the only way to recover from a loss is to move forward.

“I can’t go back in time, I wish I could go back three hours ago,” said Compton. “With three games left in the conference and everyone jockeying for position and San Miguel’s clearly on top, this thing could play out, we’re not going to make the playoffs.”

Compton knew Sumang would be key in the final moments of the game, but his words are wind now and all he could do is look back in the mistakes they did and learn from them.

“Roi Sumang was a superstar in college, the kid’s a talented basketball player,” said Compton. “He played great.”

And it wasn’t just Sumang who repelled Alaska’s comeback attempt. The Aces also shot themselves in the foot with their sloppy play.

Alaska turned the ball over 26 times, and none more damaging than the miscue between Calvin Abueva and Kevin Racal with 20 seconds left and the Aces trailing by just two points, 100-98.

“We’re the worst in the league right now, turning the ball over,” said Compton. “A lot of them are just being careless with it, a lot of us are trying to make plays through triple, quadruple teams.”

“If you don’t respect the game, it’s gonna disrespect you right back. And I told the guys after the game ‘you know how many bad players there are in the PBA? Zero.’”