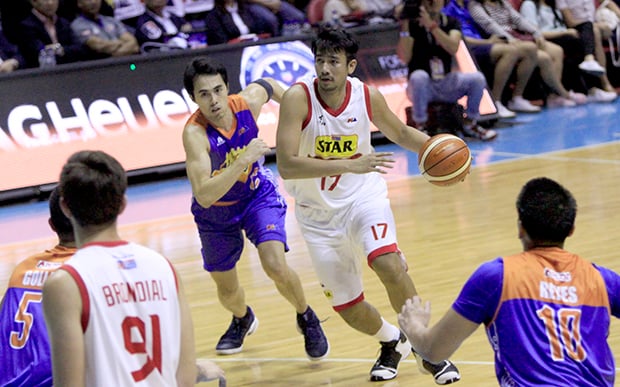 The Star Hotshots checked a two-game slide and created a heavy five-way logjam at fifth place in the 2017 PBA Philippine Cup with an 88-77 subduing of the TNT KaTropa Texters at Smart Araneta Coliseum Sunday night.

Beaten by Barangay Ginebra and Alaska Milk in their last two games, the Hotshots fought with a great resolve to get back on the winning track and forge a tie at fifth with the Texters, the Aces, the Kings and the Phoenix Fuel Masters at 4-4.

The Hotshots played efficiently almost all throughout, pulling off the wire-to-wire win to add to their earlier victories over the NLEX Road Warriors, the Rain or Shine Elasto Painters and the Fuel Masters.

“The mindset was our defense versus their offense. The goal was to limit them below 90, and we held them below 80,” said Star coach Chito Victolero. “I have to make special mention of our guards who defended well against Jason Castro.”

The Hotshots pulled a solid effort together on the defensive end to contain Castro and his teammates.

Offensively, Ian Sangalang, Aldrech Ramos, Allein Maliksi and Paul Lee led the way as the Hotshots seized the initiatives from the starting block and held sway to the finish.

Sangalang, Ramos, PJ Simon, Mark Barroca and Rome dela Rosa did the job at the start before Lee, Maliksi, Marc Pingris, Jio Jalalon and Rafi Reavis came off the bench to provide the sustaining power.

After yielding the first basket to TNT, the Hotshots sprinted ahead, 15-4, and led by as many as 19, 59-40, in their emphatic victory.

“We’ve learned a lot from our previous games,” said Victolero.

“And we have to have the mental toughness in the end. Yun team namin maraming beterano. But as a group, yun ang binubuo namin—lumarong beterano as a group,” Victolero added.