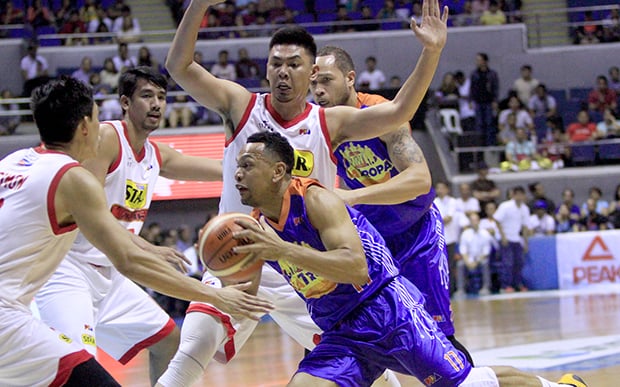 Even Jayson Castro admitted TNT lacked effort in its 88-77 defeat to Star on Sunday.

“Nawala yung effort namin, at isa na ako doon (Our effort was gone, and I was one of those),” he shared.

Slow to rotate and beaten to 50-50 balls by a locked in Hotshots crew, the KaTropa found themselves down, 15-4, and was even demoralized when the lead grew to as high as 19, 69-40 early in the third.

Though the squad performed better in the second half, the damage was already done as TNT couldn’t recover.

The difference was glaring, with Star nabbing 15 offensive rebounds which led to an 18-8 discrepancy in second chance points.

Castro offered no excuses and said the KaTropa must find their old form if they hope to advance to the playoffs.

(Maybe we have to push ourselves harder and the coaches also need to remind us that we’re not going to win with just offense, but also with defense.)

Castro rued TNT’s missed opportunity as it lost a golden chance to make a case for the top two, and rather, found itself on a tightrope as it dropped to joint fifth place with Ginebra, Alaska, Star, and Phoenix all carrying similar 4-4 slates.

(We wasted an opportunity. We’re practicing our plays but we couldn’t apply them. For us, I hope we make more efforts.)

Still, Castro believes that the KaTropa have enough in their gas tank to pull wins and secure a spot in the top eight.

(We’re confident because we know that we’re doing the things we have to do. We just have to apply those things in the games. We see that if we’re playing defense, we’re getting stops. I hope the lessons from our loss, we can apply to our remaining games.)