Lee wants no letup from Hotshots 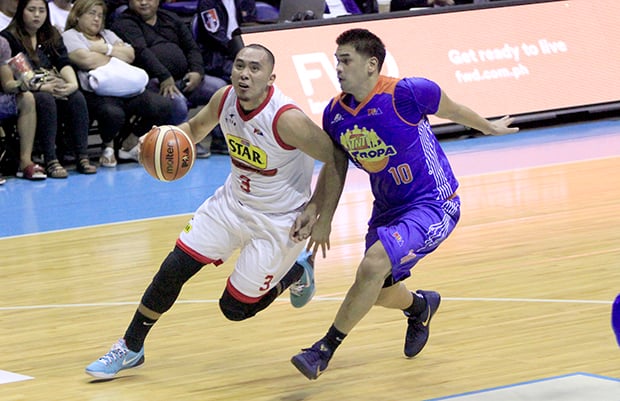 Star couldn’t have landed in a more complicated spot in the 2017 PBA Philippine Cup standings.

After a resounding 88-77 victory over TNT Sunday, the Hotshots lodged themselves in a five-way tie with Ginebra, Alaska, Phoenix, and the KaTropa, who all have 4-4 records.

And to get out of the logjam, shooting guard Paul Lee has one simple solution.

“Kailangan lang naming gawin ang trabaho namin (We just have to do our jobs),” said Lee at Smart Araneta Coliseum.

Lee had 10 points in the victory on 3-of-11 shooting but his low scoring output wasn’t much of a problem for the Hotshots as it was their defense that ultimately catapulted them to victory.

Star allowed TNT to a respectable 40 percent shooting, 28-of-70, but it was the Hotshots’ defense on the three-point area that was impressive as the KaTropa converted just seven of their 26 attempts.

“Ayusin lang namin ang spacing namin and magiging maganda ang mga resulta namin (We just have to fix our spacing and we will get the results we want),” said Lee.

Read Next
Player of the Week: Resurgent Sumang steps up for Elite
EDITORS' PICK
Get exciting deals and discounts when you download the new McDonald’s App
Beyond water service: Maynilad builds massive infrastructure projects to clean up Metro Manila waterways
Seventh judge assigned to handle De Lima case
PH preps for China virus: Question of when, not if
Museums ‘put to sleep,’ churches closed amid volcano’s unrest
SM continues to send relief assistance to remote towns in Batangas
MOST READ
Passengers from Wuhan, China to be flown out of Kalibo, Aklan – CAAP
Part of Aurora Boulevard in Cubao closed from Jan. 25 – Feb. 1
Lacson on Duterte’s threat to end VFA over Bato’s canceled visa: Where is the connection?
Seventh judge assigned to handle De Lima case
Don't miss out on the latest news and information.