Sumang: Elite in ‘must win’ vs Hotshots 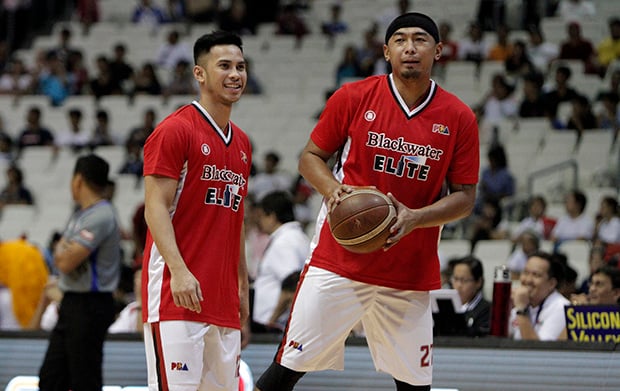 Blackwater’s Roi Sumang, left, with Raymond Aguilar during shootaround before the Elite’s game against the Mahindra Floodbuster on Christmas. PBA IMAGES

Roi Sumang may finally be coming into his own after a slow start to his PBA career but his focus remains on Blackwater’s fate in the 2017 PBA Philippine Cup.

That’s why even though Sumang had 20 points, four assists, and three rebounds in the game, the only thing he could care about was the Elite fell to the Barangay Ginebra Kings, 99-90, on Friday.

“It’s really tough because we should’ve been among the top teams but instead, we dropped in the standings,” Sumang, who is averaging 15.5 points in the last four games, said in Filipino.

Blackwater couldn’t sustain its strong fourth quarter after Ginebra, led by Scottie Thompson, fired a decisive 11-2 blast to pull away from an 82-deadlock.

With the Elite now sitting at seventh with a 5-5 card, Sumang said the Elite’s next outing will be do-or-die.

Blackwater faces a Star side bannered by Paul Lee, whom Sumang has looked up to since his collegiate days with University of the East.

“It will be a difficult game especially with Paul around. He’s been my idol since my college days in UE and he’s been my mentor even now in the PBA,” said Sumang, who was a third round draft pick by GlobalPort in 2015.

But it’s not just Lee who Sumang and the rest of Blackwater should prepare for as the Elite are also expected to have their hands full in containing Star’s other key players in Mark Barroca, Peter June Simon and rookie Jio Jalalon.

“It’s a must win for us so we can get back to the top. We have to really work and fight hard on Wednesday if we want to make the quarterfinals.”